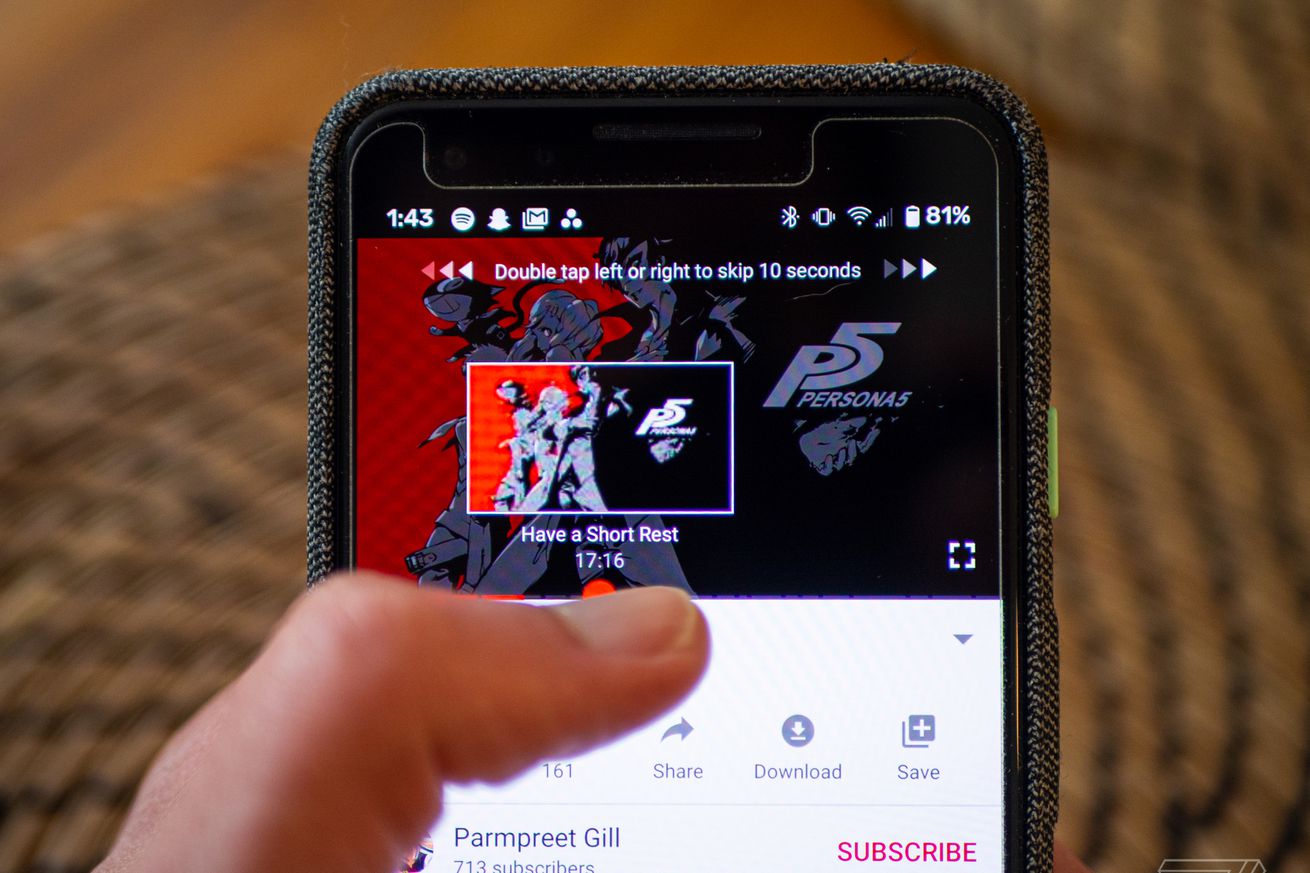 YouTube is releasing its new video chapters feature today to all users on desktop, phones, and tablets. The chapters, which soft-launched in early April, make it easy to skip to precisely where you want to go in a video, like a book. It’s not rocket science. It helps me get exactly where I want to go, then it gets out of the way.

On desktop, a video with chapters won’t look all that different from how videos have always looked. In fact, the biggest change is barely noticeable: the bar used to show video progress will have little black breaks in it to indicate where each chapter ends and a new one begins. When you scrub over a section with your mouse, you’ll then see the title of the chapter it’s in.

The same design applies to how chapters work on the phone and tablet app for Android and iOS. Though, on phones YouTube had to account for the simple fact that your finger might get in the way of you seeing where the chapters are. To solve for that, YouTube’s phone app will trigger a haptic buzz when you’ve arrived at the next chapter. On tablets or other mobile devices where haptic feedback isn’t available, the video progress bar will automatically snap to the beginning of a new chapter when you lift your finger off the screen. If you’re looking for a specific time marker while you scrub through the video, keep your finger on the screen, then move it below the progress bar without letting up to clearly see the time marker.

There’s no limit on which videos can get chapters or which creators have access to the feature. The only catch is that chapters aren’t automatically applied to each video. So, unlike many new projects that Google unveils, this one isn’t powered by machine learning (at least, not yet). Getting chapters on any other video relies on making sure there are some timestamps in the video description, the same somewhat hack-y workaround that creators have been utilizing for years to make their videos easier to navigate.

Basically, this feature relies on the uploader doing the work of putting timestamps (the first one has to start at 00:00) and a chapter title to go with each one into the description. Your video must also have at least three timestamps that last longer than 10 seconds each. Then YouTube’s new feature will scrape that metadata to use for its new chapters interface.

If you’re looking for examples of videos with chapters in action, you can check out this Radiohead performance from 2000 or this cooking video. This unofficial mix of Persona 5 tunes also has chapters. YouTube says that it will remind creators about inserting chapters during the upload process to ensure that more videos have chapters moving forward, though it’s entirely optional.

YouTube shared with The Verge that the genesis of this feature came from how-to-style videos uploaded to the platform — specifically, how difficult it was for some viewers to know how far or little to skip forward to the next step without having chapters to guide them.

Matt Darby, product manager at YouTube, and Robert Thompson, a UX designer at YouTube, told me that their team actually visited people’s homes to do research on how they interact with videos. If those two gentlemen came to my home, they’d see that I was nearly driven mad trying to pinpoint the exact moment in a 20-minute instructional video I needed to see in the sourdough bread-making process. Chapters would have been great to have, and hopefully that video creator will add them soon (hello Pro Home Cooks, great video).

For those who like to use their keyboard to skip forward in videos, YouTube told me that it is working on a new set of keyboard shortcuts to make skipping between chapters easier for power users, though it won’t be ready for launch. YouTube also said that it’s exploring bringing gestures to navigate between chapters to mobile, given that portable displays come in so many different shapes and sizes, though those won’t be available at launch either.

Chapters aren’t the most exciting feature to land at YouTube, but still, they’re a welcome (if slightly overdue) quality-of-life feature that will make navigating video content much more accessible. We’ll be checking back in on the feature at a later date to see how creators are adapting to it. We’ll also be sure to update you on whether it has launched on more devices. For now, YouTube is launching on desktop and mobile, though the company told me that “it’s definitely thinking about” bringing the feature to set-top boxes and gaming consoles where the app currently exists.