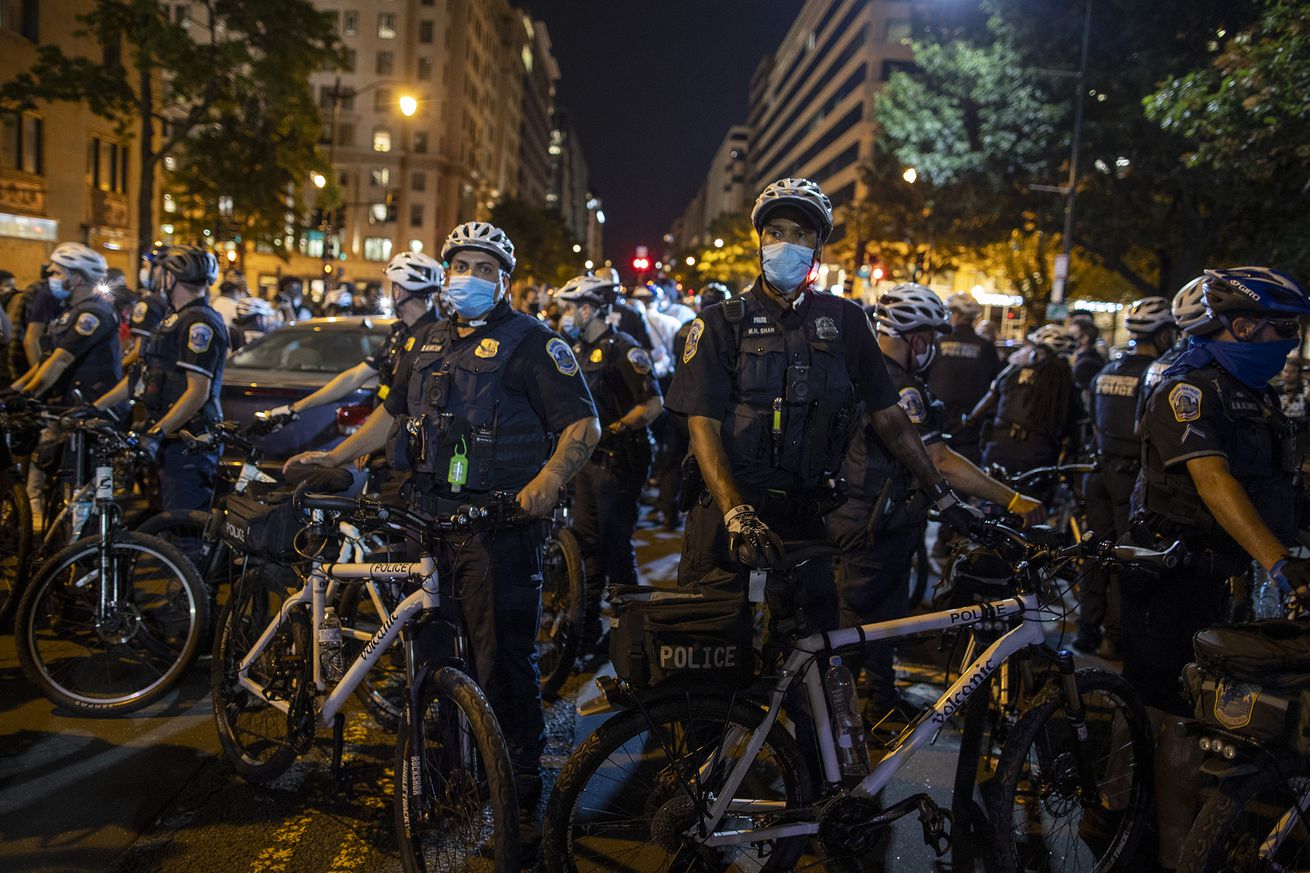 Protesters gathered on the final night of the Republican National Convention which is set to nominate Trump as the Republican candidate for a second term as U.S. President. Washington, D.C.on August 27th, 2020. | Photo by Tasos Katopodis/Getty Images

As protesters met a wall of police surveillance this summer, tech writers set loose a flood of articles on how to “cop-proof” your phone. Bluetooth and Wi-Fi signals can be used to track you in a crowd, the articles pointed out, so it’s better to turn them off before you leave the house. Stingray devices can track you through the cellular signal, which means you might want to leave your devices on airplane mode. Police may try to search your phone if you’re detained — so experts recommend turning off biometric unlock features like fingerprints and facial recognition and rely on a password you can refuse to give up.

The common wisdom began to extend to social media, and sharing photos and videos. Uncovered faces are particularly dangerous: they provide grist for the facial recognition systems police use to identify protesters — as happened in New York. If you do take photos, equally intense countermeasures are recommended. The most advanced software will automatically blur every face it finds in your photo, turning a crowd photo becomes a sea of faceless bodies.

It was timely advice. As protestors have flooded streets around the world, more people have become aware of just how easy it is to share more information online than you realize. And there are lots of ways your digital footprint can be used against you. But that scramble to reclaim digital footprints can hide the deeper logic of protest, and the trade-off between risk and impact. There’s never been a truly cop-proof phone, any more there’s been a cop-proof person. Exposure can be managed and contained, but it can never be erased — and what remains is pivotal for any successful political action.

Social media is the clearest example of this tradeoff. Services like Geofeedia let police surveil posts geo-tagged within a certain area, drawing from Facebook, Twitter and Instagram all at once. (There have been some API disputes — social networks aren’t thrilled about being used for surveillance — but most activists assume the basic product has remained intact.) At the same time, the broadcasting power of social media has become a huge part of modern protest infrastructure. Those channels can turn a single march into a citywide event, or knit dozens of individual protests into a nationwide movement. The surveillance and publicity are inseparable, both direct consequences of protesting in public.

In her 2017 book Twitter and Tear Gas, Zeynep Tufekci argues for a signaling theory of protest: your willingness to march in the streets signals a personal commitment to the issue. If you’re willing to spend the day marching, you’re probably going to show up at the polls. If you’re willing to protest peacefully, you might be willing to protest less peacefully if your demands aren’t met. According to Tufekci’s theory, a retweet isn’t worth much; it’s too easy, and doesn’t signal any meaningful commitment to the issue. Public civil disobedience lies at the other end of the spectrum. When a local NAACP leader in Portsmouth gets arrested while protesting a confederate statue, for example, their willingness to be publicly charged is part of the point.

In the middle, things get murky. As the countless photos from Ferguson protests showed, the right image can be a powerful force for good. But even with faces covered, a photograph can pose a threat to anyone in the frame. The most recent example was Lore-Elisabeth Blumenthal, who was photographed attacking a Philadelphia police car with a flaming wooden shard during a protest in May. Two police cars were set on fire during the protest, and Blumenthal was charged with felony arson based on public photos of the scene. Her face isn’t visible in the photos, but you can see her t-shirt — a handprint reads “keep the immigrants, deport the racists,” which led the police to an Etsy shop where she had left a product review. Combined with the distinctive tattoo on her forearm, it was enough for them to bring charges against her.

It’s hard to know what impact a photograph will have on the world, or how to balance risk against political power. Technology can help us manage these conflicting impulses, but it can’t change the basic tradeoff. The strongest protections aren’t technical at all, but political guarantees like the right to free assembly or the presumption of innocence in court. Beyond the law, protections come from the solidarity between thousands of protestors and the public pressure one can put on the state.

Risk is only part of the picture. This summer has shown the incredible impact protests can have on our country, and on the broader fight against police violence. Every person at every protest has accepted some measure of risk, and in cases like Blumenthal’s, the consequences were severe. But it’s important not to lose sight of the broader struggle, and the real, if slow, progress that’s made. Your phone is a vulnerability, just like your right to assembly — but it’s a source of power too. Pressuring our leaders to do what’s right is how we make the risks worth it.