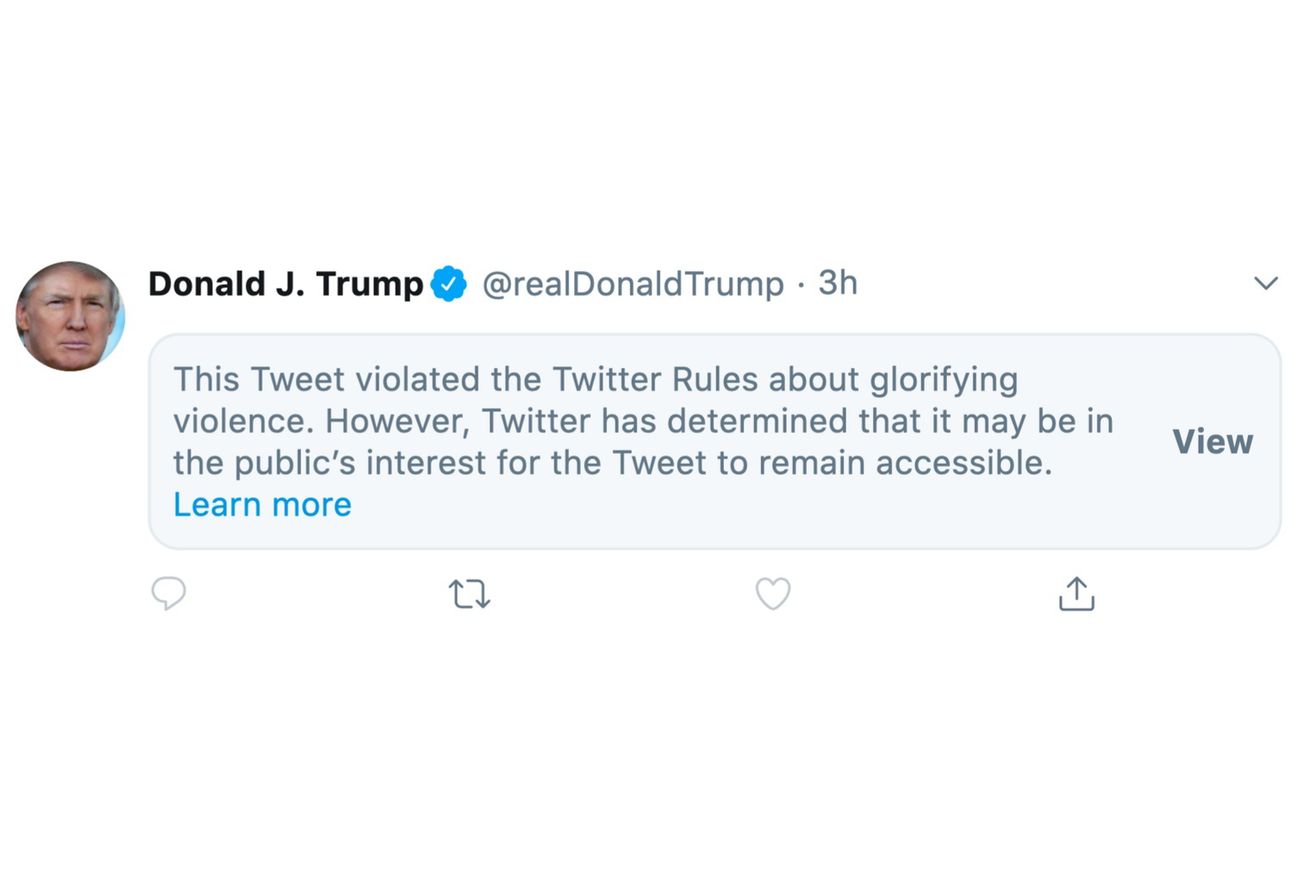 Twitter has placed a public interest notice on a tweet from President Trump for breaking the platform’s rules about the “glorification of violence.” However, Twitter has not chosen to remove the tweet from its platform entirely, because it believes it to be in the public interest. Twitter announced the notice in a tweet thread from its official comms account.

“These THUGS are dishonoring the memory of George Floyd, and I won’t let that happen,” President Trump’s tweet reads. “Just spoke to Governor Tim Walz and told him that the Military is with him all the way. Any difficulty and we will assume control but, when the looting starts, the shooting starts. Thank you!”

Twitter seemed to be taking issues with Trump’s line “when the looting starts, the shooting starts.”

This Tweet violates our policies regarding the glorification of violence based on the historical context of the last line, its connection to violence, and the risk it could inspire similar actions today. https://t.co/sl4wupRfNH

Trump is intentionally or inadvertently quoting former Miami Police Chief Walter Headley. In December 1967, a few months before riots broke out during the (Nixon) Republican National Convention, Headley said “when the looting starts, the shooting starts” at the announcement of a new “get tough” policy for policing black neighborhoods. Headley promised to use shotguns, dogs, and aggressive “stop and frisk” tactics in a bid to reduce crime. “We don’t mind being accused of police brutality,” the New York Times reported him saying at the time. “They haven’t seen anything yet.”

“We’ve taken action in the interest of preventing others from being inspired to commit violent acts, but have kept the Tweet on Twitter because it is important that the public still be able to see the Tweet given its relevance to ongoing matters of public importance,” Twitter wrote in a follow-up tweet.

The notice was posted after tensions escalated between Twitter and the President this week. On Tuesday, the company labeled two of Trump’s tweets as “potentially misleading” for the first time. Trump had claimed that mail-in ballots would result in a “rigged election.” Yesterday, Trump signed an executive order with the aim of limiting the legal protections given to social media sites like Twitter under Section 230 of the Communications Decency Act.