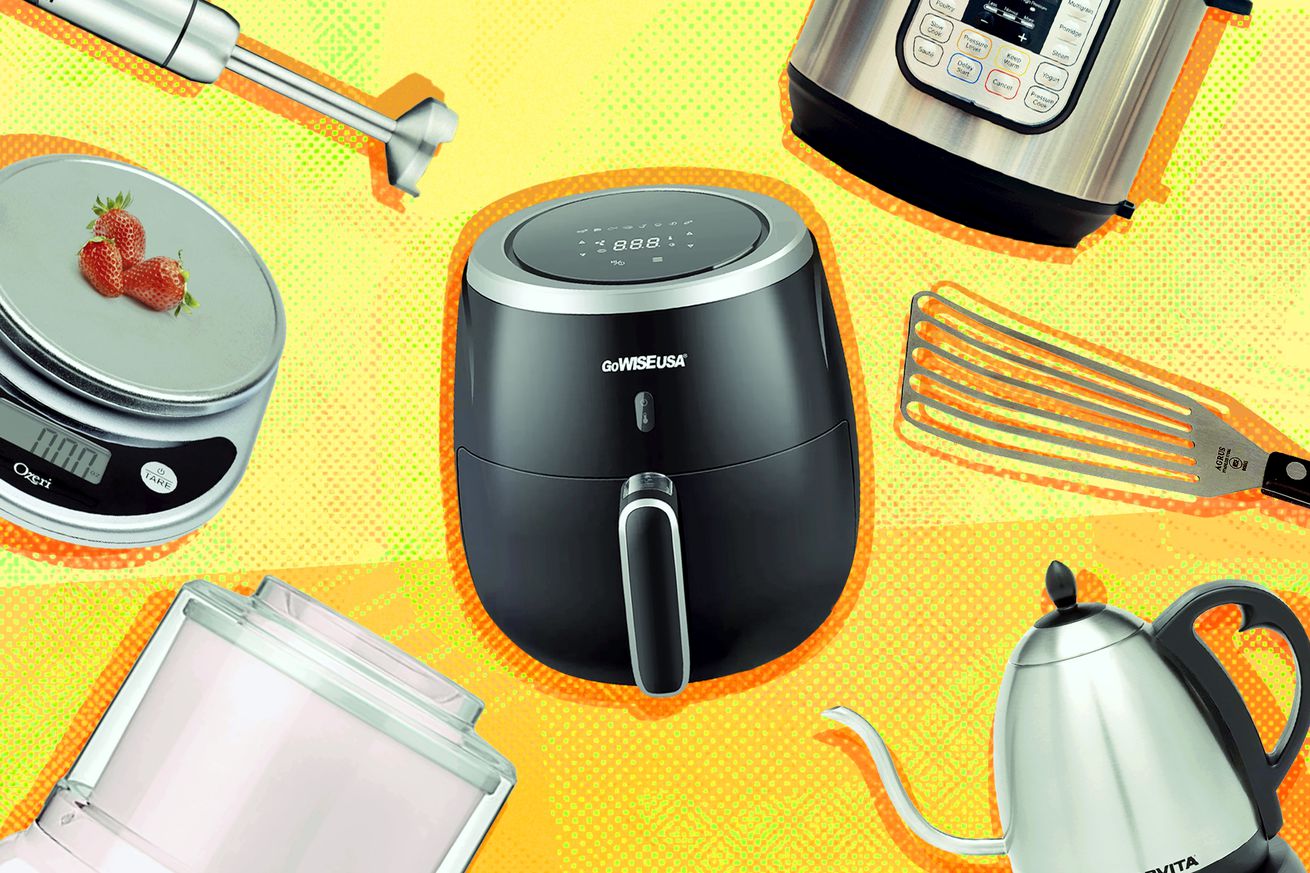 Illustration by Grayson Blackmon and Alex Castro / The Verge

When you’re stuck at home because of pandemics, bad weather, or just because you don’t feel like going out, there’s nothing more satisfying than cooking something really fantastic. Even if you’re not an experienced or enthusiastic cook, sometimes it’s really satisfying to create a new and tasty dish for you, your friends, and / or family.

We asked the staff of The Verge what kinds of equipment, gadgets, and tools they use to make their kitchen adventures better tasting, easier, or just more fun. Here are some of the answers we got.

This is one of my favorite tools in the kitchen. It’s a hand-held blender that can be used to prepare soups, smoothies, whipped coffee, and more. I often use it in my Indian cooking just to smooth out the sauce a little and bring the dish together. It’s a game-changer, and I honestly just have so much fun using it. We also don’t own an actual blender so this has come in handy to make smoothies and shakes as well.

When I was in college, I drove through a literal Maine blizzard to buy an immersion blender because I really wanted soup.

I have been making a lot of sauces and smoothies, and since I have a tiny kitchen, I don’t have a lot of counter space for more gadgets. This is why I love my immersion blender.

I love my Breville hand blender. It makes soups and stuff that you don’t want to transfer into a blender so easy. I love the model I have, but clearly, there are a lot of good options out there.

The Paprika Recipe Manager is my entire cooking process now. Paprika is good because it:

I’m seconding Adi’s recommendation of Paprika, which is the best recipe app, bar-none. It’s also got really great app support, with desktop and mobile apps on every platform (Mac ($15), Windows ($15), iOS ($5), and Android (free for up to 50 recipes).

We just received a GoWise Air Fryer as a quarantine gift, and we couldn’t be happier with it! It replaces our microwave 90 percent of the time for reheating, and food comes out tasting crisp and delicious. It’s also great at cooking. We’ve made stuffed mushrooms, fried chicken, steak sandwiches — you name it, this thing makes it.

In the UK, where I’m from, it’s pretty unusual for a kitchen to come without an electric kettle, and honestly, I’ve got no idea how anyone manages without them. Obviously, the main thing my kettle gets used for is brewing cups of tea, but it’s just as happy boiling water for coffee if you’re brewing it in a device like an AeroPress. When the water’s boiled the power automatically cuts off, which certainly feels a lot safer than the risk of leaving a burner on. Unfortunately, the US’s lower voltage means that electric kettles aren’t quite as fast as a burner if you’re boiling water to cook with, but I think they’re still a pretty useful kitchen addition.

It’s so fast, and I never have to worry about stuff catching fire.

Also 1ing an electric kettle. I love my Bonavita kettle.

KitchenAid stand mixers are great for mixing cake mix or whisking, but the thing I most regularly use mine for is kneading dough using its dough hook accessory. I’m sure there are purists out there who’ll claim that a machine can never match the process of kneading by hand, but for me, it’s worth it just so I can get dough ready for baking without having to cover an entire work surface with flour. I will accept that using a stand mixer means I’ll never end up with Paul Hollywood’s forearms of steel, but that’s my burden to bear.

There are so many great things you can do with the Cuisinart food processor: pesto, perfectly mandolined veggie slices for lasagna, babka dough, savory crackers, dicing onions without weeping. My mom met a Cuisinart employee who swore by the 11-cup as their least-repaired model.

I’ve never been a great cook so, in an attempt to get me to eat more home-cooked food, my mom gifted me an Instant Pot. This was years ago, and I’ve never looked back. I am the queen of soups, but it’s such a handy tool to cut down cooking time and effort on almost any dish. For the most part, you just toss in all the ingredients, set the timer, and go about your business.

About 90 percent of our quarantine meals have been made in an Instant Pot. There’s just no time to do anything anymore, and we can make large amounts of healthy food, with little attention, and have leftovers. I liked it before, but now I’m ready to build a shrine to it.

1 to everything above. Also, the Instant Pot makes delicious rice — just make sure to wash the rice a few times before you put it in!

I really like my overpriced Baratza Virtuoso coffee grinder. It’s expensive but has served me well for nearly five years now. It works very well for everything from fine-grind espresso to coarse French press. Almost every part is replaceable, as well, meaning I can keep it going for many more years to come. (Apparently, the exact model I have has been replaced by this newer one with a digital timer.)

I’m a big believer in the AeroPress. It’s especially good for camping.

Cast iron pots are one of my key kitchen tools. First off, they’re essential for getting a great crust on a homemade loaf of bread (especially sourdough). But they’ve got myriad uses beyond that: soups, stews, roasting, deep-frying, and more. Plus, they’re relatively cheap, and if you take care of them, they can last a lifetime.

I’m a big fan of Lodge’s Double Dutch Oven since the lid doubles as a second cast iron pan, making it twice as useful.

Full disclosure: I have never used my fish spatula for fish. But its thin, flexible edge makes it perfect for getting under the edges of fried eggs, seared meat, and grilled cheeses.

We actually do use our fish spatula for fish, among other things, and it works beautifully, especially when trying to flip over delicate filets. If you’re picking up an especially large piece, two are better. And if you’ve got one of the Lodge cast iron pans (see above), you can use it to scrape off the burned bits.

I hate when pieces of chopped veggies roll off the edge of a cutting board, so I insist on using one big enough to fill up most of the counter. It can fit an onion and garlic with room to spare, so I don’t feel cramped while I’m focusing on my (mediocre) knife skills.

I only use it once every few months, but I love my Joule sous vide. It takes a bit of setup, but once everything is in the water bath, my job is basically over for a few hours. It cooks everything to the perfect temperature every time, meaning no more over- or undercooking. I get the perfect amount of pink with my steak, my veggies don’t get mushy, my chicken breasts stay moist, and I don’t have to stick everything with a food thermometer 15 times to make sure I don’t accidentally give my family food poisoning.

A sous vide is great. I use mine all the time — I can proof bread in it, make garlic confit, lots of good meat / fish options.

Is it big? Yes. Is it extremely limited in what it can do? Also yes. Can I make ice cream and sorbet whenever I want? Yes.

We use a lot of garlic in my household, and traditional garlic presses never did it for us — they usually produced a messy, slushy paste. A friend of ours introduced us to the garlic rocker, which is not only fun to play with but produces beautifully minced pieces of garlic, perfect for sautéing and other uses.

A must for bread baking, especially if you’ve gotten your hands on some sourdough starter (or made your own). Anything that measures in grams and ounces will work — just get whatever’s cheapest.