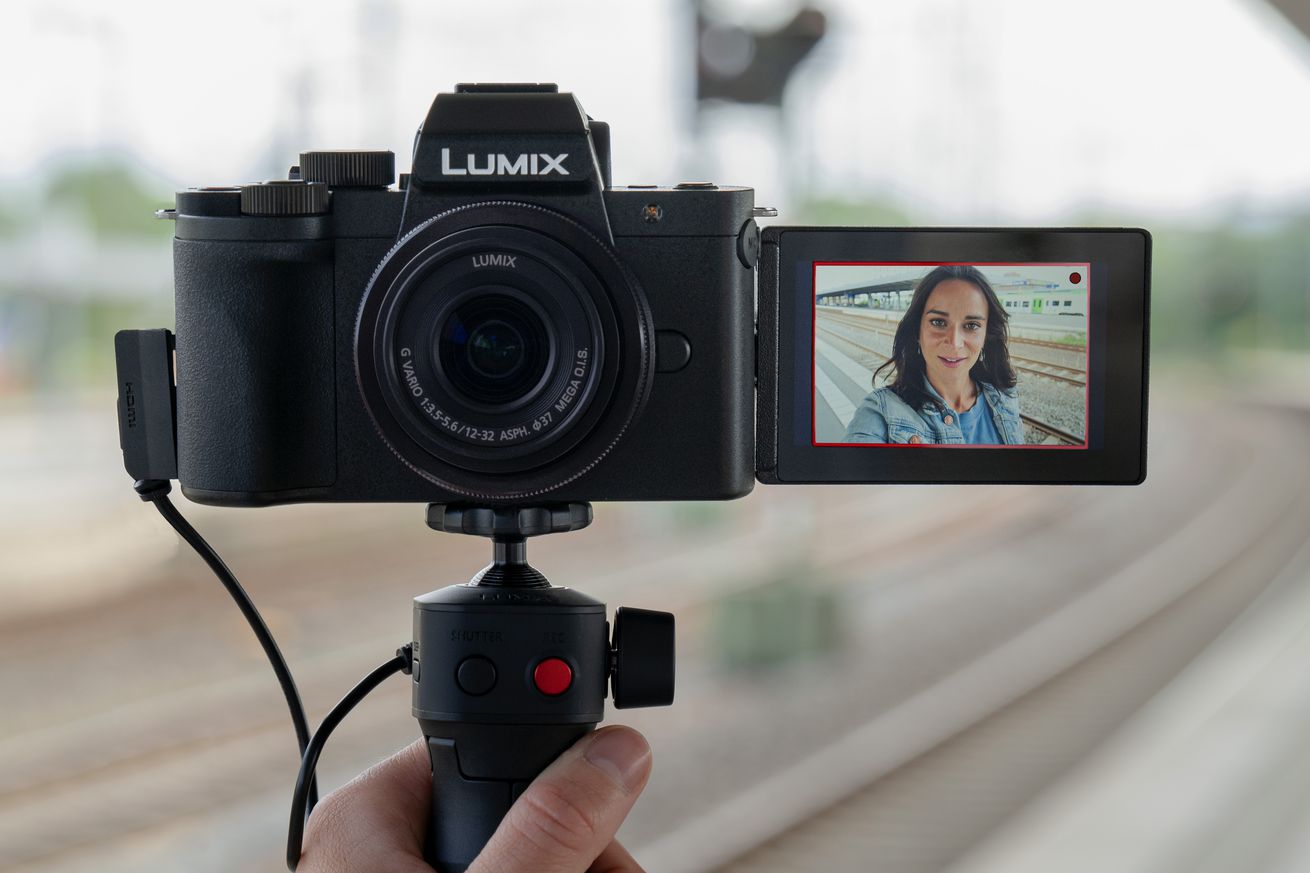 Panasonic has announced the new Lumix G100 mirrorless camera (known as the G110 outside of the US) that’s compatible with the full suite of Micro Four Thirds interchangeable lenses. It will be out by the end of July and, like the recently launched Sony ZV-1, it has several features specifically geared toward people who want to create vlog video content. With a preorder price of $749.99 (until August 1st — it’ll cost $50 more after that), this could be a solid pick, depending on your needs.

The G100 has an electronic viewfinder that Panasonic says is 2.8x brighter than the one in the Lumix G90. Sony’s ZV-1 doesn’t have this feature, but both the G100 and the ZV-1 have an articulating display. In the new Lumix, the display automatically triggers a video selfie recording mode when it’s flipped out to the side and adjusts the depth of field instantly once it finds your face. (Note: If you like the idea of ZV-1’s “Product Showcase” mode that does not automatically adjust the depth of field relative to a face, there’s no such quick tool here. You’ll just need to hide your face behind the product you’re holding up or completely move out of the frame to have the G100 automatically adjust the focus.)

The G100’s video feature will outline the screen in red to let you know when it’s recording. If you want to upload to multiple platforms, like YouTube or Instagram, you can switch the aspect ratio of the recording on the fly (indicated by yet another color-coded border) without the need for post-processing.

Unlike the ZV-1, the G100 supports interchangeable lenses

Another neat feature is an option on the mode dial called “S&Q,” which stands for slow and quick. When S&Q is activated, the G100 can record FHD footage in 4x slow motion up to 120 frames per second at 30p, or you can double the speed of FHD footage to 30 frames per second at 60p. It’s nice to have this feature readily available on the camera so you don’t have to adjust the speed in post.

You can split video recordings into smaller clips from within the camera; it also comes with Panasonic’s V-Log L feature to give footage a wider dynamic range so you have more flexibility when you color grade in post-processing. When you’re ready to send your footage over to your phone, you can do so with the “Send Image” button on the body, which pairs the camera to your phone or tablet over a 2.4GHz Wi-Fi connection via a companion app.

The microphones can provide spatial audio by tracking faces

Most vloggers probably don’t rely heavily on built-in microphones, but Panasonic is going hard on Nokia’s OZO spatial audio to power the three-microphone array in the G100. When the camera detects a face, it will focus the microphones on the face wherever it is in the frame — all while using active noise cancellation to block out other sounds that might otherwise find their way into your recording. If the camera detects more than one face, it will use different microphones in the array to catch all of the voices. If there are no faces in view, it will switch to recording in surround sound audio.

If you don’t want to fuss with the built-in microphones, the G100 has a 3.5mm jack for external microphones (though, unfortunately, not for headphones).

The G100 has a 20.3-megapixel sensor that can record 4K resolution video at 30p and 25p in 10-minute sessions, or FHD at 60p in 20-minute sessions. It charges via a Micro USB port and has an HDMI port that can push a signal to a capture card. Panasonic says it won’t be usable as a webcam at launch.

Panasonic has sacrificed a few features, both to meet its price point and to end up with a lightweight build. The G100 isn’t weather-sealed, so it’s not a great choice for vlogging during inclement weather. And for video, the G100 relies on a hybrid of in-body electronic image stabilization and support for lens-based OIS through its Micro Four Thirds compatibility. It relies solely on lens OIS for taking photos. Panasonic showed a demo of the G100’s most stabilized setting while recording video, and while everything was a little choppy over our virtual briefing, it seemed smoother than the Canon EOS M50 to which Panasonic compared it.

The Panasonic Lumix G100 launches in late July in the US. It’s arriving in two different configurations. What’s called the K kit contains the camera body and a 12-32mm lens for a preorder price of $749.99. The V kit has a preorder price of $799.99 and contains the camera, the aforementioned lens, and a tripod (priced at $99.99 separately) that can trigger recording or the shutter without having to tap a button on the camera. Panasonic will also include a second battery and a wall charger during this period. Preorder lasts until August 1st; after that, they’ll both go up in price by $50 (and you’ll miss out on the extra battery and wall charger).