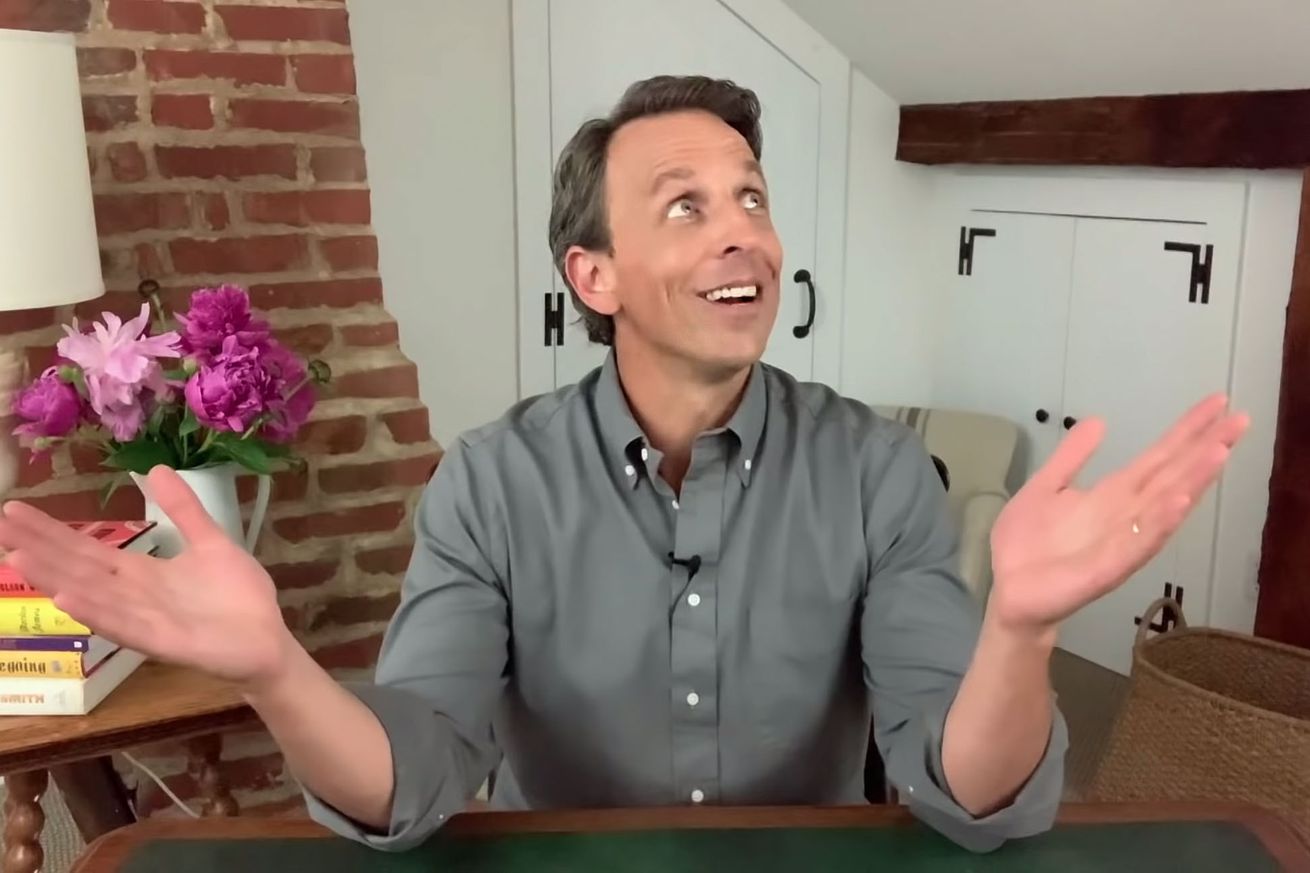 Consumer electronics have replaced studios during the pandemic

Seth Meyers has taken on some new jobs over the past few months. Since he started hosting Late Night at home during the coronavirus pandemic, he’s also been in charge of recording his own video and audio, running a teleprompter, and uploading the files to his production staff to make the show look, feel, and sound enough like the one he’s been making in 30 Rockefeller Plaza for the past six years.

A late-night talk show is a pretty well-oiled machine at NBC — the format has been around since at least the 1950s — but according to Eric Leiderman, one of the producers for Late Night with Seth Meyers, a lot of the production workflows from Studio 8G couldn’t carry over to a show that’s done completely remotely.

“We felt very vulnerable from a production standpoint for sure,” Leiderman says. “We basically made a new show from an old show that we had been working on. We had to figure out how to make it well-oiled from each of our respective homes.”

Consumer audio and video tech has been the backbone for getting content on air during the pandemic for many productions. Big broadcasting networks like NBC, ESPN, and CNN have been relying on hardware that people can pick up from Best Buy or Guitar Center for around $100 to $1,000, which is a fraction of the cost of the professional cameras, microphones, lights, and other production gear that’s currently sitting unused inside their empty studios.

This is mostly because of the ease of use that these gadgets offer. Apple, Logitech, Sennheiser, and other consumer tech manufactures have democratized AV equipment designed for anyone to buy and use. Since the hosts of these TV shows aren’t trained to operate professional broadcast-quality systems, it’s left producers, directors, and studio technicians to send iPads, USB podcasting microphones, Lightning port lavalier microphones, and webcams to the hosts and guests instead.

“We felt very vulnerable from a production standpoint for sure.”

After a few trial-and-error technical sessions in the early weeks of Meyers hosting from various rooms in his house, the producers figured out the most efficient way to create an entire program every day while each staff member is in a different location. What’s been seen on Late Night for the past couple of months is a front-facing camera from an iPad Pro, which the team sent over to Meyers so he can record himself at his desk and also use it as a teleprompter.

“Everyone’s already familiar with it because there’s so many iPhone users,” Leiderman says. After recording, Meyers uses AirDrop to transfer the files to his laptop, then uploads it to Dropbox for the production team. That process “is the most simple of things to utilize because everything works. Assuming that the internet connections were always playing along, which is always the big thing,” Leiderman says.

Meyers uses an iPad Pro for filming and as a teleprompter. A ClipMic Digital connects to an iPhone for recording audio.

Meyers is not the only host relying on Apple’s ecosystem. Jimmy Fallon has been hosting The Tonight Show in front of an iPhone around his home with his family, as have Samantha Bee and Conan O’Brien. AirPods can be seen sticking out of the ears of Stephen Colbert on earlier at-home episodes and guests on Jimmy Kimmel Live like Jerry Seinfeld, Kerry Washington, and Mark Hamill.

While at home, Late Night is no longer being recorded live-to-tape (which means recording the full show linearly the way the audience would watch it) to accommodate guest scheduling, the flexibility offered without an audience, and the lack of a control room. Instead, it’s recorded in chunks of segments and edited together later that day for a late-night premiere.

“We are not in a pro-level situation.”

For the guest spots — an integral part of any late-night talk show — Meyers conducts the interviews over enterprise-turned-consumer video chat app Zoom.

Before each interview, Late Night director Alex Vietmeier and lighting director Kathleen Dobbins chat with the guests on Zoom to figure out the right spot for them to sit in their home to get the best-looking framing, lighting, and sound.

Recording the call for the show is charmingly hacky. During the interviews, members of the production team sit in on the Zoom call, and each pins a different attendee to their screen and records their end of the chat locally.

“We are not in a pro-level situation. We’re only using our personal laptops at home without broadcast gear,” Vietmeier tells The Verge. “You record that Zoom call, then if you have enough people with enough computers, you can capture all the different cameras and camera angles that you need.”

Recording Meyers’ audio was also dependent on consumer tech. Since the show couldn’t look like it’s in a TV studio, Vietmeier wanted to make sure it at least sounded more like it was. The producers quickly realized that viewers were more critical of audio quality than video quality, a common complaint on YouTube.

To get a clearer, more fit-for-broadcast signal than the internal iPad Pro microphone, the Late Night staff sent Meyers the Sennheiser ClipMic Digital, which is basically a Sennheiser ME-2 lavalier microphone (a standard with Sennheiser’s broadcast-quality wireless lav packs). It has a Lightning connector that Meyers can plug directly into his iPhone and record in an app.

“In the studio, he uses the Sennheiser MKE-2, which is its cousin. It’s a little higher-end than the MKE-2, but the ME-2 produced that same body and produced that same sound that our viewers are used to hearing when Seth is speaking,” Vietmeier says. Meyers uploads that to his team as well, and the team’s editors sync the video and audio files together.

Other broadcasters have used Shure’s MV88 Plus, Rode’s SmartLav, and Apple’s AirPods for audio, all of which connect directly to smartphones.

Other shows and live video productions have also incorporated the microphone-into-the-smartphone technique. A remote operations professional at ESPN told The Verge that a majority of live shots on shows like SportsCenter are done using a Rode SmartLav connected to the TVU app on a smartphone or tablet. Another producer at Billboard said they have sent a lot of the guests the Shure MV88 Plus to plug into their phone, notably because a lot of celebrities and artists just don’t use laptops anymore.

The gear gets the job done and doesn’t seem to distract from the overall product, but YouTubers have set the sound quality bar high. Compared to professional vloggers, late-night hosts look more like public access TV anchors than highly paid Emmy-winning television stars. But because of the route that their shows have taken to adapt, the lack of polish makes them seem more relatable and real. Seeing Meyers in a cramped attic on a Zoom call makes for a more down-to-earth program than one where he’s in front of a window displaying a rendered image of Manhattan.

Another big aspect of Late Night’s look and feel is the music from the house musicians, The 8G Band. In replacement of performing live in the studio, the band now meets on the group video chat app Houseparty to figure out which musical bumps to play between segments and interviews. Everyone in the band eventually records their parts separately and sends their recordings to associate music director Eli Janney to assemble and mix.

A lot of the band members use GarageBand for recording. “[It has] pretty simple inputs and DI’s for them,” explains Leiderman, a musician himself who works closely with the band. “And then the magic of Dropbox and a little home mixing “

The band then gets the final track back and records video of themselves with their smartphones to play along — similar to a music video — which is what you see at the bumps between segments and for the theme at the top of the show.

While these gadgets are designed for ease of use for consumers on platforms like YouTube, Instagram, and TikTok, they aren’t necessarily designed to be used for broadcasting on big productions without fail, like the studio gear hardwired into control rooms and TV trucks.

A lot of these tools are buggy or dependent on a strong internet connection.

Both Leiderman and Vietmeier can recall a camera in the studio going out only twice during their entire run on Late Night. At home, they now run into the same technical issues we all run into: a computer mouse dying, a Zoom connection freezing, a neighbor mowing their lawn during a recording, or waiting for a file to upload.

Though there’s room for improvement, the team has accepted the trade-offs of convenience over quality. When a team is producing an hour-long variety show four days a week, there are workflows they had to let go of to keep it running. If there’s too much troubleshooting on the tech side — like big files taking too long to transfer, encoding problems, or complicated menus and settings on the gear — they could possibly miss their delivery window for the show and be forced to scrap the entire program they spent all day making. A few months in, that hasn’t happened yet.

“There’s two sides to every coin. Like could it be better? It could always be better,” Vietmeier says. “But is ‘better’ really better when what you’re doing is working?”