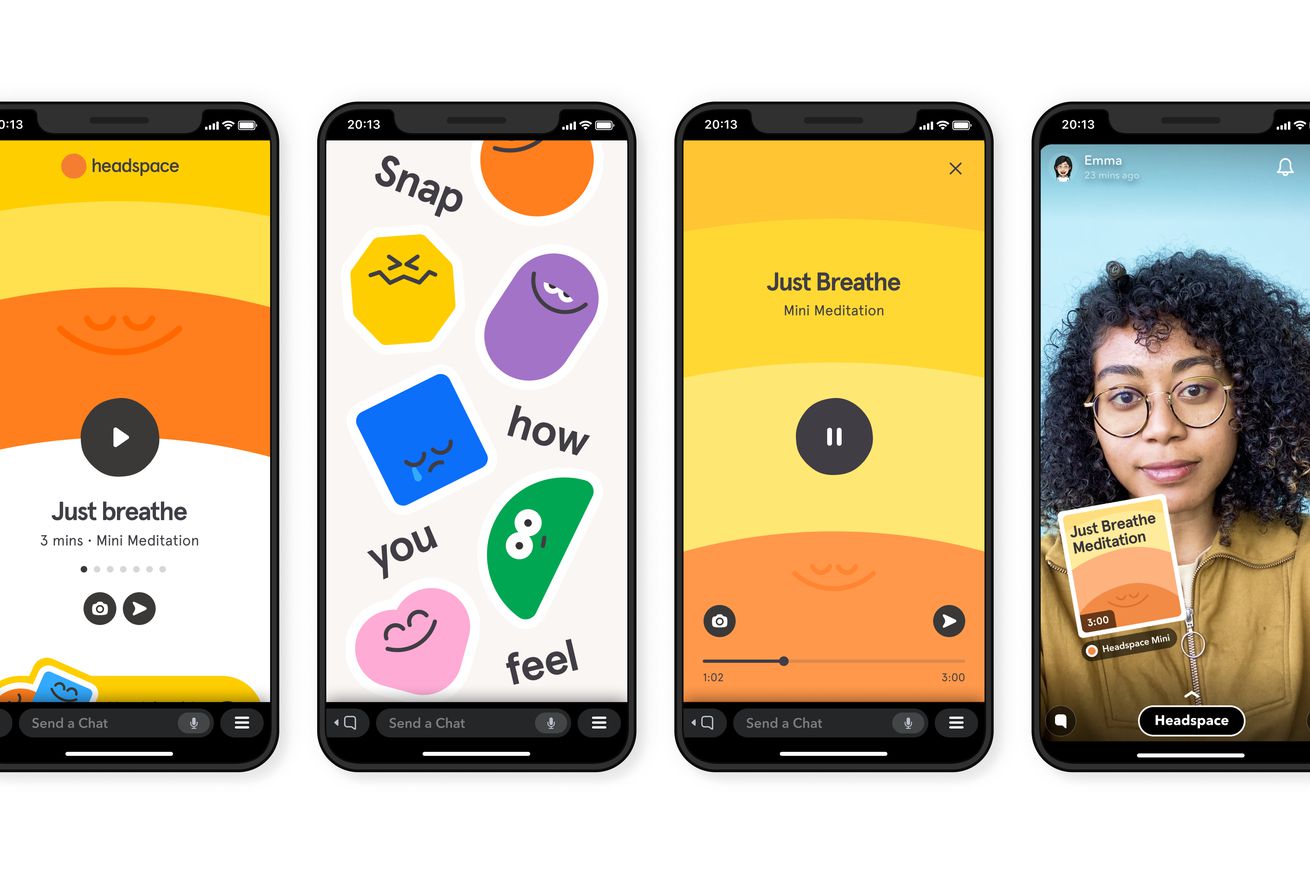 Snap today announced Minis, a suite of miniature applications made by third-party developers that run inside of Snapchat. Minis are built using HTML and enable a range of experiences from meditating alone to buying movie tickets with friends. Minis, which are integrated into the chat window on Snapchat, were one of several new features announced today at Snap’s virtual Partner Summit.

The existence of Minis was first reported last month by The Information, which likened them to the mini programs that have turned WeChat into one of the most popular apps in China. The programs — which let users buy food, pay their bills, and complete other tasks — generated $113 billion for WeChat last year, up 160 percent from the year prior, The Information reported. The company takes a cut of purchases made through the app.

Snap announced seven Minis to start. They include an app to coordinate your schedule at the next Coachella music festival; a mini version of Headspace to meditate and send encouraging messages to friends; Movie Tickets by Atom for choosing showtimes, picking seats, and buying tickets; and Tembo, which lets students create flash card decks for studying.

In an interview with The Verge, Snap CEO Evan Spiegel said Minis would help the company extend its reach to include e-commerce, with more social shopping experiences that let friends browse together. “Let’s say you’re getting ready with your friends, or your school dance is two weeks from now — you can actually shop together with your friends, which I think could be a really fun experience,” Spiegel said.

Minis had perhaps the most potential to change Snapchat of the new features announced by the company on Thursday. But several another announcements promised to change the app’s look, functionality, and content. They include:

Snapchat is getting a navigation bar for the first time. The new design, which began testing earlier this year, is now available to all users. It provides easy access to Snap Maps and the company’s original video series, raising their profile within the app.

Snap Maps will begin to display basic information about local businesses, including location, address, hours of operation, and reviews from TripAdvisor and Foursquare. Later this year you’ll be able to order food on the map through Postmates, DoorDash, and Uber Eats.

You can now submit public snaps to topics such as “life hacks” or “oddly satisfying” and browse other users’ contributions. The move gives users a new destination to explore, as well as introduces a new layer of curation to the 3 million public snaps submitted each day.

Snap announced 10 new games for Snapchat’s budding games platform. The titles include Bitmoji Paint, a first-party title that invites players around the world to contribute to a single massive collage.

Game developers can now license Bitmoji to bring your Snapchat avatar into their games. Scrabble GO and Uno are among the launch partners.

Snap said it had signed multiyear deals with Disney, ESPN, NBCUniversal, ViacomCBS, the NBA, and the NFL to make shows for its Discover tab. Discover will also introduce a new feature called Happening Now that displays editorially curated headlines from around the United States and the world.

Snap is letting developers add its camera to their own apps. Nike, Squad, and MLB Ballpark are among the apps that will integrate the camera, giving users access to filters and other Snapchat features.

Snap has introduced a new kind of filter called a Dynamic Lens that incorporates real-time information. Sports-related filters might include current scores, for example, or a Houseparty lens might invite friends into a conversation based on who is already there.

Another new filter, called Local Lenses, will let users team up to decorate nearby buildings with digital paint as part of a shared augmented-reality world. And an update to Lens Studio, Snap’s filter creation software, allows developers to import their own machine-learning models.