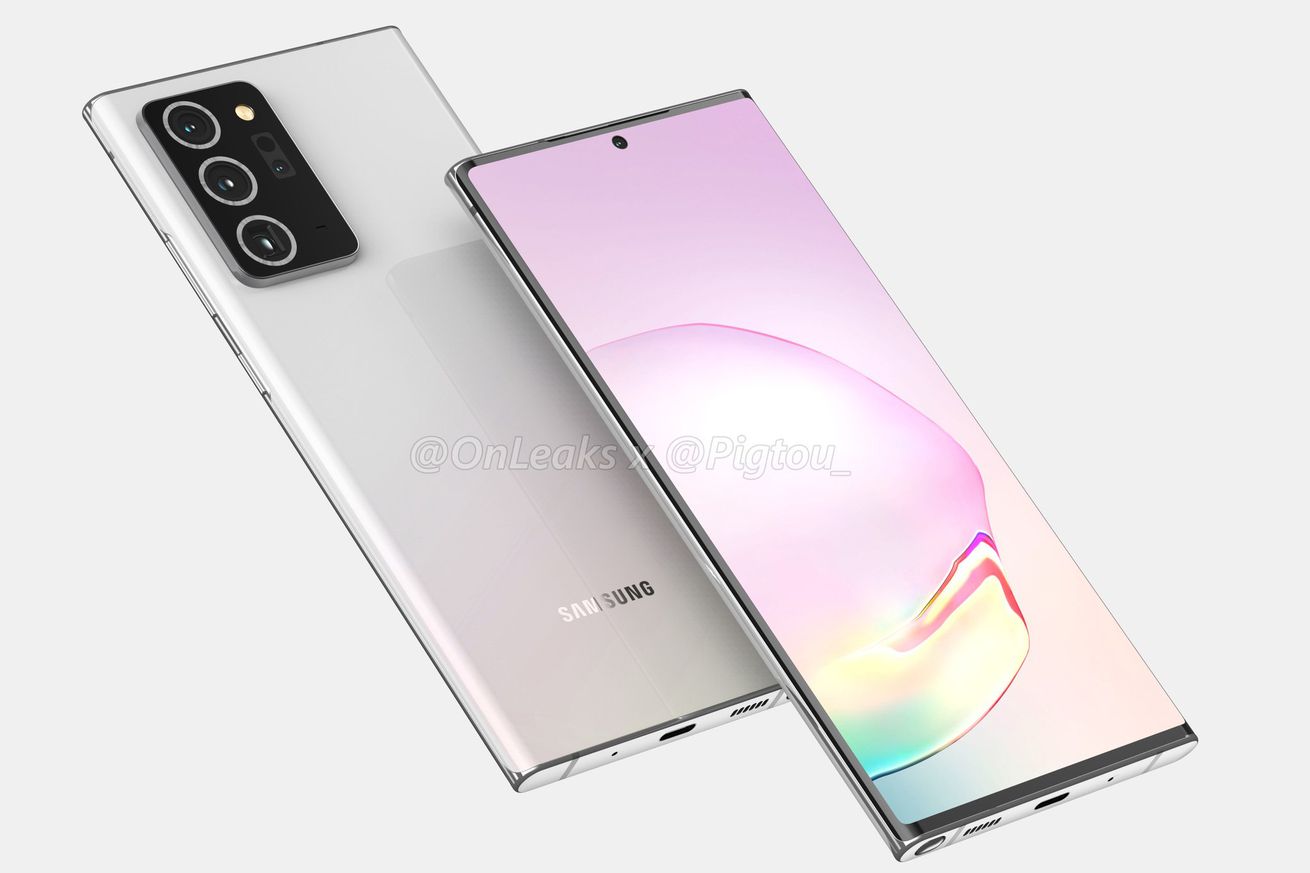 Renders of the Note 20 Plus come from leaked CAD drawings. | Credit: @OnLeaks / Pigtou

Last year’s Galaxy Note 10 Plus was truly a thing of beauty, with an amazing screen and superlative industrial design. And, judging by some high-quality (and completely unofficial) renders of the Galaxy Note 20 Plus, it looks like Samsung won’t be changing too much in 2020. The only major difference is a new, bulkier camera module on the rear of the device.

These renders come from noted leaker @OnLeaks in collaboration with phone-case maker Pigtou. As with all renders based on leaked CAD drawings, they should be taken with a pinch of salt, but the design they suggest for the Note 20 Plus seems reasonable enough.

The most obvious feature is the big, nearly edge-to-edge display, with curved bezels, sloping sides, and a small, central hole-punch cutout for the selfie camera that’s near identical to the 2019 design. The top and bottom edge also look the same as that of the Note 10 Plus, with speaker grille, charging port, and space for the signature S Pen stylus.

In terms of size, the Note 20 Plus will reportedly be slightly bigger than the 10 Plus, with a 6.9-inch display instead of last year’s 6.8-inch AMOLED screen, and slightly longer but thinner dimensions, with the same overall width (165mm long, 77.2mm wide, and 7.6mm thick, according to leaks).

The most noticeable change, though, is the camera module on the rear of the device, which is much bigger than that of the 2019 Note Plus, according to the renders.

In the Note 10 and Note 10 Plus this module was a pretty slim oval containing three lenses, while the flash module was positioned to one side, flush with the case (in the 10 Plus there are two additional divots that supply the phone’s depth-sensing capabilities). But the Note 20 renders show a larger, more rectangular module that apparently integrates all these components — lenses and assorted gubbins — into a single raised unit.

This looks extremely similar to the camera system on this year’s Galaxy S20 Ultra, which was very much designed to show off Samsung’s photography abilities. The S20 Ultra’s module contained five lenses sporting up to 108 megapixels, and a 4x optical zoom that offered solid results up to a 10x zoom with the help of software. There’s a lot to say about that camera system, but check out our full review from February for more information.

If the Note 20 and 20 Plus are anything like previous iterations in the series, they’ll contain the best, biggest, and brightest of Samsung’s smartphone specs. So it’s not unreasonable to expect some high-end camera hardware. We’ve not seen any leaked specs for the 2020 Notes, though, so will have to see what surfaces in the months to come.

Reports suggest that Samsung will be launching the Note 20 in August, though this will likely be an online-only event as a reaction to the ongoing COVID-19 Pandemic.