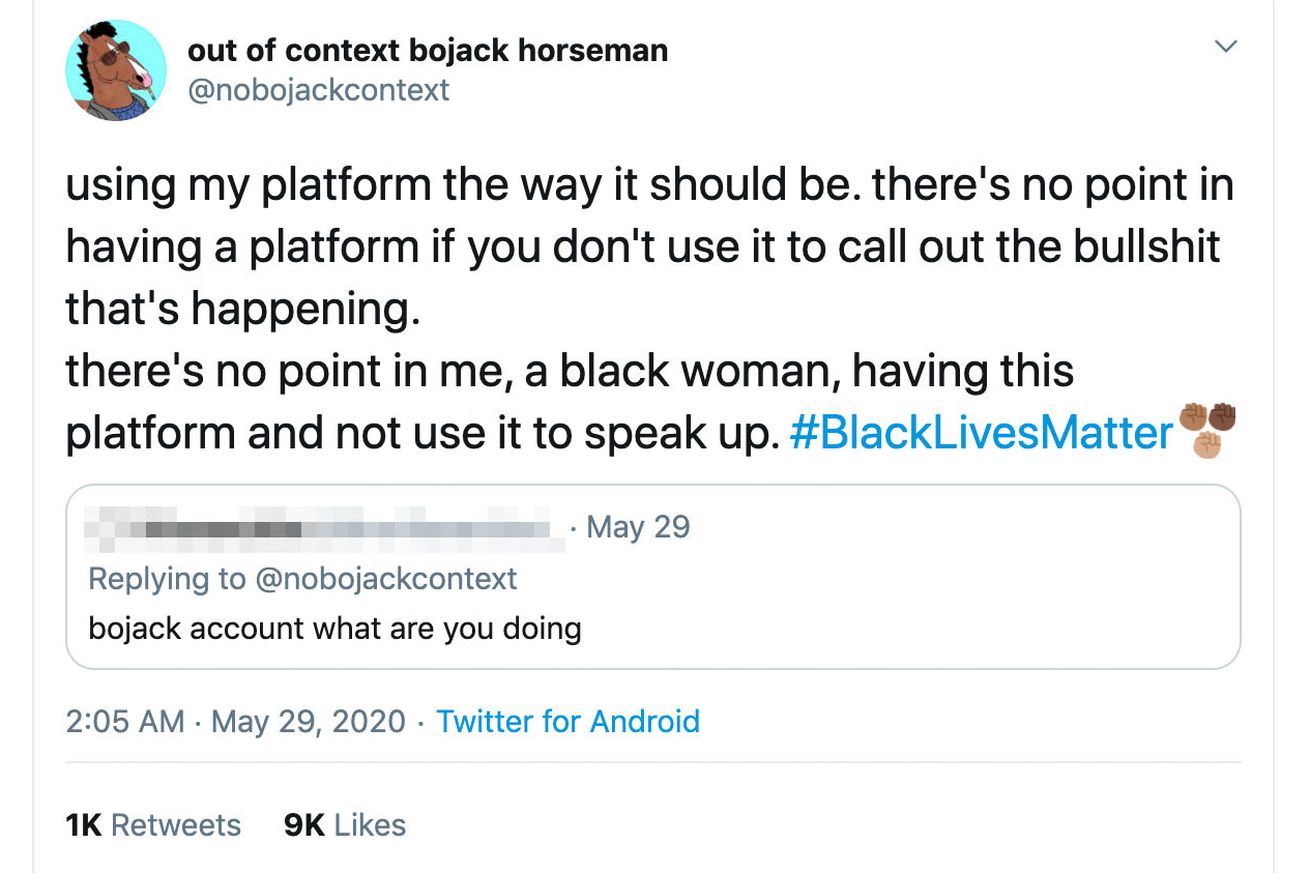 The “out of context bojack horseman” account usually tweets memes and screenshots to its nearly 180,000 Twitter followers. But recently, the account’s feed has looked a lot different: it’s listed bail funds for people to donate to, posted advice on safely protesting, and amplified black voices fighting against police brutality.

“Anyone who says shit like that honestly baffles me,” Alaa, who runs the BoJack account, tells The Verge. “Like, read the fucking room. There’s more important shit going on, and you’re over here whining that there isn’t a new screenshot to retweet.”

Every creator The Verge spoke to said they were doing this because choosing not to use their sizable platforms with highly engaged followers is akin to staying silent. Having a platform and using it wisely — something that YouTube creator Jake Paul chose not to do over the weekend — is a driving force for each creator looking to contribute their voices to a growing sea of protesters. The account creators all asked to remain anonymous or only use their first name to protect their identity.

Despite some pushback, the creators say they’ve largely seen praise and support. “There’s no point in me, a black woman, having this platform and not use it to speak up,” Alaa tweeted on Friday. BoJack Horseman creator Raphael Bob-Waksberg responded, asking her to “please keep it up,” while others chimed in thanking Alaa for her tweets.

Alaa started using her BoJack account for activism last year. Protests were occurring in Sudan, where Alaa’s family is from, and she felt it was her responsibility to call attention to what was happening. Alaa explained that the decision stemmed partially out of a personal place, because it was important to her, but also because “having this platform and not doing something useful feels completely pointless,” she told The Verge.

Choosing to use their platform as a means to educate followers and spread information that protesters could use was an easy decision, said the creator behind Futurama No Context, even when some followers were asking them to stop. “Telling out of context accounts to ‘just stick to clips and screenshots’ is like the whole ‘shut up and dribble’ thing that happened,” alluding to when Fox News host Laura Ingraham told LeBron James to “shut up and dribble” after he spoke out against racism in America.

“We have a right to spread a message, and we are thankful enough to have accounts with a mass amount of people following them, allowing us to get more eyes on the Black Lives Matter movement,” the creator said. “To me the more we get the messages we are spreading to people’s minds then we can get closer to seeing some change.”

Out of context accounts have started retweeting each other, showing their support for other fan account creators using their platform to help. The person behind Victorious Out Of Context has “spent the last few days signing petitions and donating” on top of “researching to the best of my abilities the tweets that I’ve been retweeting on my [out of context] accounts, in the interest of not spreading misinformation.” Misinformation is something that all the creators who spoke to The Verge said they were worried about spreading, especially on a platform like Twitter where it’s so easy to retweet a viral message that turns out to be untrue and even harmful.

More and more out of context — or “gimmick” — accounts are figuring out how to navigate the waters. There’s a responsibility to speak up, but also a responsibility to not share hoaxes or posts from bad actors. Dan, the creator behind Adult Swim Out of Context, told The Verge he’s “seeing gimmick accounts that haven’t been active for a few months make Black Lives Matters related posts.” Whether the future means that out of context accounts will continue to incorporate political tweets into their feeds is less clear, Dan said, but for now it’s clear that a group of creators is taking a stand and leaning on each other for support.

One thing that remains clear from every creator The Verge spoke to is that no one is worried about people who threaten to unfollow their accounts in the midst of it all. Kenna, the creator behind john mulaney out of context, told The Verge, “while it’s good to have our memes and stuff, we have to remember [memes are] not everything.”

“I say just unfollow me to be honest,” Kenna said. “Because if you can’t handle me bringing awareness to such a serious topic like this then I just don’t know what to say about you. I’m not going to be tone-deaf and ignore it because you personally think I should just stick to screencaps.”