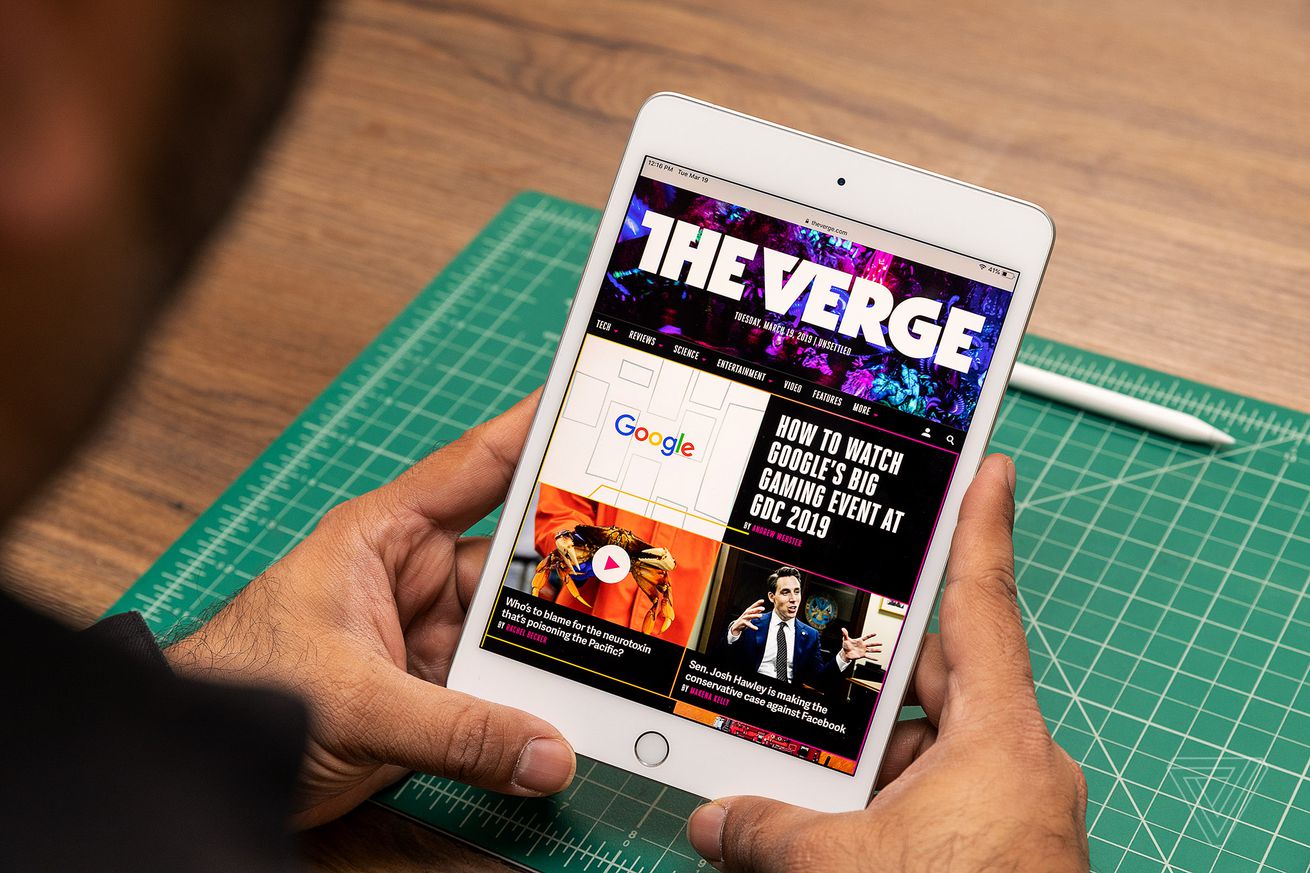 Whether you’re shopping for your first iPad or upgrading from a previous generation, figuring out which Apple-made tablet is best for you can be confusing. There are a bunch of models out there, which makes it hard, and a new version usually comes out each year. And since most of them look similar, it becomes even more difficult to shop with confidence.

Let’s break it down.

Currently, Apple sells five different models. In order of most affordable to most expensive, there’s the 10.2-inch iPad, the 7.9-inch iPad mini, the 10.5-inch iPad Air, the 11-inch iPad Pro, and the 12.9-inch iPad Pro. Thankfully, your odds at picking a good tablet are greater than 1 in 5. Each of them is a really good tablet in its own way, but it’s important to find the right tablet for you.

What does the “right” tablet mean? A lot of things. The right size, the right price (and not paying more or less than you should), the right amount of power and functionality, and lastly, the right port so it has compatibility with the accessories you want or already own.

The more that you know about each iPad model ahead of buying, the better. So, we’ve laid it all out, drilling down and explaining each tablet’s biggest selling points and drawbacks, starting with the most affordable option.

Apple’s seventh-generation iPad is a small design departure from previous versions. First off, it has a bigger screen (10.2 versus 9.7), and you’ll find the Smart Connector port along one of its sides, which is great if you want to connect one of Apple’s Smart Keyboards. It’s worth noting that the more expensive iPad mini (2019) doesn’t have this connector. This iPad has first-generation Apple Pencil support, though you can also use the Logitech Crayon to draw or write on the tablet if you don’t want to spend as much.

Like we said about the sixth-generation tablet last year, this is still a fairly no-frills option, but don’t mistake that for meaning it’s a bad tablet. Starting at $329 for the 32GB model (though frequently up to $80 off these days, or up to $100 off if you’re looking for a 128GB model), this is the most affordable way to get an iPad.

While the 2019 iPad doesn’t offer any standout features that you won’t find in the other models, there isn’t a huge amount that this model can’t do compared to the more expensive iPads. That said, the differences might matter to you, depending on your needs.

The no-frills option, but not a bad tablet by any means

Barring a few exceptions, this device is built with most of the same components that you can find in the previous-generation iPad — for example, it’s equipped with the same A10 Fusion processor found in the iPhone 7 and iPhone 7 Plus from 2016. Apple did apparently add an extra gigabyte of RAM in the newer model, totaling 3GB. That’s not enough to make this iPad blisteringly fast with all apps and games, given that the processor is still the same. However, it’s a little boost that should keep it in the game longer than last year’s model. If you keep your expectations in check, it should deliver relatively good performance for the next few years.

Dieter Bohn reviewed this iPad, closing with this paragraph that sums it up nicely:

Even though the processor is getting a little long in the tooth and Apple’s Smart Keyboard is too pricey, it remains impressive that you can get a computer this good for this price. It’s not a device that I would recommend upgrading to if you have a tablet you’re even moderately happy with, but it is a device I am sure you’ll be happy with if you buy it.

The iPad mini is the iPad for people who want something that’s a little more compact than Apple’s other options. This model has a 7.9-inch display, and although that’s not a pocketable size for most, it splits the difference between an iPhone and a larger tablet. If you like to read, watch movies, or play games, and want something bigger than your phone but smaller than a laptop, this is a good option.

Apple’s 2019 refresh injected some much-needed life into the tablet, which hadn’t received an update since 2015. The latest version has an A12 Bionic processor, meaning that it’s now in the same performance ballpark as Apple’s 2018 iPhones, including the iPhone XS and iPhone XR. The iPad mini starts at $399.99 for the 64GB configuration; quadrupling the internal storage to 256GB will cost $100 more.

The mini tablet got a powerful upgrade in 2019, and it’s still viable

Like the cheaper 10.2-inch iPad, the iPad mini also has first-generation Apple Pencil support, and you’ll need to leave it clumsily plugged into its Lightning port to charge. This is the only iPad currently available that doesn’t have a Smart Connector, so you’ll have to use Bluetooth to pair a keyboard. That may not even register as an issue to some — but it’s important to consider when paring down your options.

Nilay Patel reviewed the new iPad mini and explains why this is the small tablet to beat:

The latest iPad Air is the entry point to most of Apple’s premium tablet features, and it’s similar to the previous-generation iPad Pro tablet in more than a few ways. First off, the Air’s screen is now 10.5 inches versus the 9.7-inch displays found in older Air models. It also cribs the Pro’s True Tone display (but not the ProMotion high refresh rate), which automatically adjusts its color temperature to the ambient lighting in your work space. The Smart Connector found its way to the Air as well, which makes it easy to connect one of Apple’s keyboard accessories (if you buy one, that is).

Like the cheaper iPad options, the Air is still limited to the first-generation Apple Pencil that charges via its Lightning port. And while many features found in the older iPad Pro made their way to the new Air, the quad speaker setup did not — the Air has two speakers. If that’s bothersome, you should consider checking out Apple’s slightly older 10.5-inch iPad Pro, which has four speakers and a ProMotion display that has a faster refresh rate. So, as long as you’re alright with an older processor, you’ll save a good amount of money. Best Buy currently offers it for $499, and Apple sells refurbished iPad Pro tablets starting at $419.

$100 more than the iPad mini, but with more screen and more features

On the other hand, compared to more affordable iPad options, the new iPad Air is the most capable tablet in terms of features. It runs on the same A12 Bionic processor found in the new iPad mini, iPhone XS, iPhone XS Max, and iPhone XR. As such, it should remain a fast-performing tablet for several years to come. And, starting at $100 more than the new iPad mini, it’s not that much more expensive if you want a lot of screen real estate.

Here’s a nice breakdown of what the new iPad Air brings to the tablet, straight from Dieter Bohn’s review:

With the iPad Air, most of the features that most people really want from a Pro machine become available without paying Pro prices. The iPad Air floats in the middle of the iPad lineup, and if you can afford it, you should get it over the basic iPad.

Apple’s 2020 iPad Pro brings some slight revision to the 2018 version, though it’s mostly the same design. It has a dual-lens camera array and a LIDAR sensor for augmented reality, an improved processor, more microphones, and the base storage is now 128GB instead of 64GB. It similarly comes at a steeper cost than you’d pay for any other model, though the price is the same as the 2018 version. The 11-inch tablet with 128GB of storage starts at $799, while the 12.9-inch version with the same amount of storage starts at $999.

Like the iPhone 11 Pro, the iPad Pro authenticates your identity with Face ID instead of Touch ID, and since it’s lacking a home button, you’ll be navigating iPadOS exclusively with gestures or with a mouse pointer.

Both the 11-inch and the 12.9-inch models have a True Tone display that adapts the screen’s color temperature to the light in your environment, as well as the ProMotion feature that makes scrolling and other animations appear smoother. Like the iPad Air and previous-generation iPad Pro, the 2020 iPad Pro has a Smart Connector port so you can easily connect one of Apple’s keyboards, including the new Magic Keyboard, without having to pair over Bluetooth. The tablet has four speakers, and it supports the second-generation Apple Pencil that magnetically attaches to its side to charge.

Small improvements over the 2018 iPad Pro

Perhaps the biggest difference between the iPad Pro and the other iPads is that it’s still the only one that uses USB-C instead of a Lightning port. If you have a fleet of dongles and accessories that connect using Lightning, you’ll need to pony up again for more dongles or for a converter. However, if this is your first iPad, or if you’re moving from an Android device, USB-C isn’t a bad way to go. It’s already part of Apple’s Macbook Pro and new MacBook Air and is rapidly gaining adoption around the tech industry. As a result, prices for USB-C accessories are likely cheaper than equivalent accessories that have Apple’s MFi certification.

In terms of performance, both the 11-inch and 12.9-inch iPad Pros feature the A12Z Bionic processor, which is a step ahead of the A12X Bionic used in the 2018 model. If you want to use the iPad Pro as a laptop replacement, there’s certainly enough power here for you to do that. And with recent iPadOS software updates combined with the Magic Keyboard that features a trackpad, it works even more like a laptop than previous models.

While the power and those improvements will seal the deal for some, my colleague Dieter Bohn who reviewed this model is skeptical that LIDAR — this tablet’s breakout feature — is worth the added cost. Also, he mentions that cheaper iPads can do most of what the Pro can do. If you’re really split on which iPad to buy, consider this snippet from his review:

Unless you’re quite sure what you are going to do with these cameras, that LIDAR, or the faster processor, chances are you’d be equally served by the much-less expensive iPad Air — or even the base iPad. Neither of those iPads is as nice from a hardware perspective. But if you don’t need the extra power, saving hundreds of dollars is also nice.