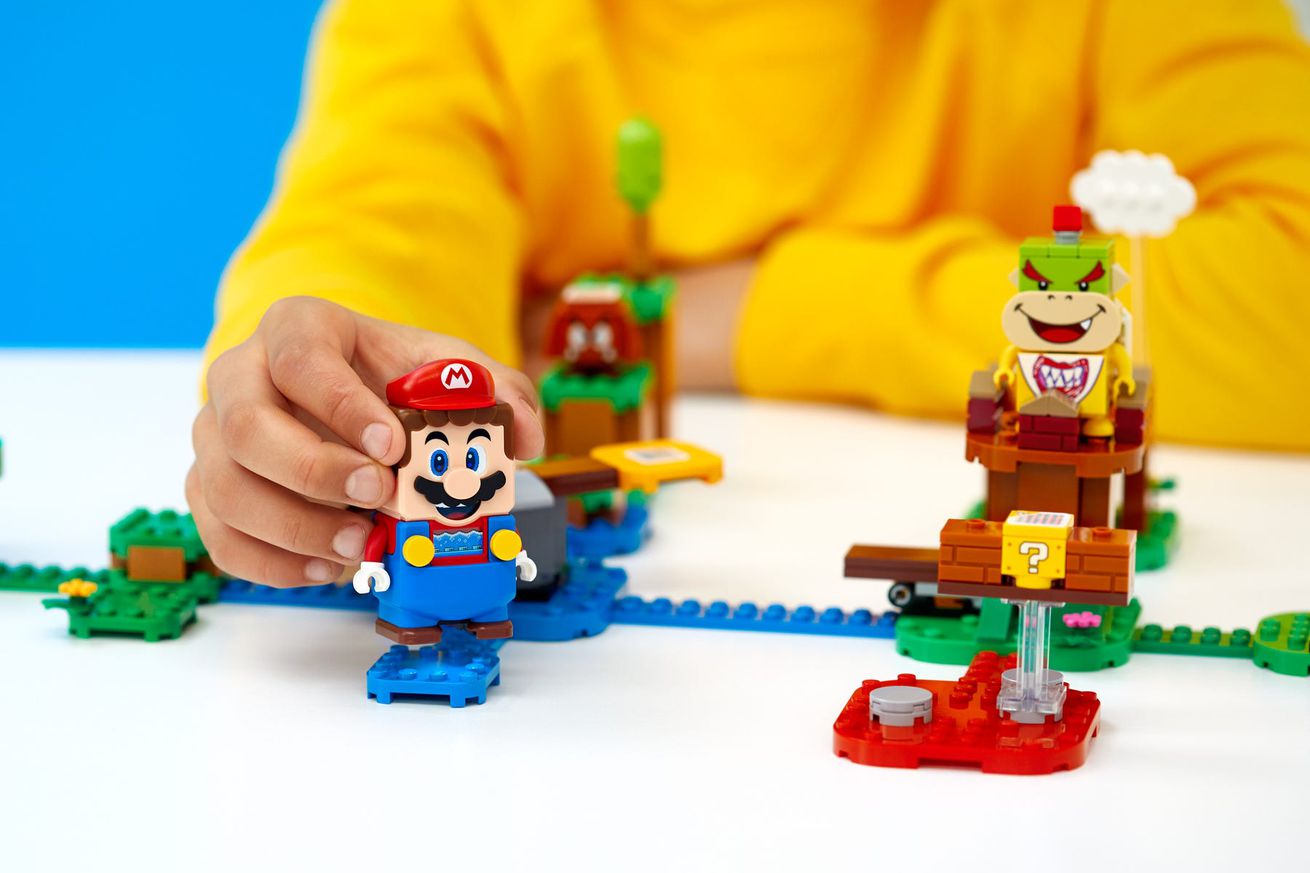 Mario is making the jump from the digital worlds of the Mushroom Kingdom to a new — but fitting — collaboration with Lego that lets players build their own IRL Super Mario levels. I’ve had the chance to try out the first sets, which are a fun spin on both the classic Mario and Lego formulas, that play out almost like a Super Mario Maker level come to life.

The finished product is a collaboration between teams of Lego employees (lead by design head Jonathan Bennink) and Nintendo staff (under the direction of Takashi Tezuka, who has produced numerous Mario titles for Nintendo, including the Super Mario Maker series).

The Super Mario Lego sets are a very different kind of app-integrated toy: unlike other smartphone or video game console-enabled products (like the Skylander games or Lego Dimensions), the focus here is on enhancing the toys, rather than building out a video game world. “We think that the joy of Lego is, of course, building and spending your time touching bricks,” explains Bennink. “So with Lego Mario, pretty early on we decided that the focus of the play — or the core play loop as we call it — should be by touching bricks.”

Despite that emphasis on physical play, the first thing that struck me when setting things up is how digitally focused everything is, at least at the start. Everything is app based, right down to the ubiquitous Lego instructions for guiding you through building the different components of the set. Each separate piece of each kit has its own miniature instruction set, along with videos that show exactly how each of the interactive pieces work. Buy a new set, and your first time scanning it adds it to your digital collection within the app.

The heart of the experience is the Lego Mario figure with a built-in display that shows the character’s eyes, mouth, and chest, and serves as the main point of interaction. There’s also a sensor on the bottom that can scan barcodes and differentiate between colors.

Bop Lego Mario on top of a Goomba, and the game will reward you with a coin. Walk over red bricks, and Mario will read it as lava and react accordingly. (Green bricks are grass, blue is water, and yellow is sand.) And of course, there are the more interactive elements: moving platforms, villain-based set pieces, and collectable items, all of which add to the experience.

The starter kit — which costs $60 — starts players off with a few elements, like a Goomba, a question mark block, a rotating platform, and a Bowser Jr. mini-boss to fight, along with the Lego Mario and the crucial start pipe and goal flag, which are used to start and end each 60-second run-through. There are also non-interactive elements, like platforms players can jump Mario over and lava and water tiles to build out their course.

The idea is that players will take those base elements and use them to create their own courses and narratives to play through. The various expansion packs — of which there are many planned — only expand those possibilities. One set adds a spinning Bullet Bill platform that required careful interaction to avoid sending Mario plummeting into the waves below. Another adds Toad, Toadette, and collectible treasure chests hidden around the level. A third features a Piranha Plant “Power Slide” that lets players rack up huge amounts of coins (if they can carefully dodge the hungry plants).

All these elements can be combined together into a single giant course. One level I built, for example, saw Mario brave a rotating platform, gave players the chance to fight a Koopa Troopa to reach a question mark block, and slide along a second platform to a junction where they could either battle some Cheep Cheeps to reach a power mushroom or take a different route and visit Toad. A final part of the course added an optional mini-boss, where players could fight through a Shy Guy, a Bullet Bill, and then face off against Bowser Jr. (granting a reward of a time bonus for extra time to complete the course).

And, as one would expect for a Nintendo / Lego collaboration, the attention to detail is excellent. All the Lego-ized Mario characters and elements are frankly adorable, and it’s easy to imagine that some fans will just collect the sets for the aesthetics alone. The interactive elements are also top notch — jump on a Goomba or collect a mushroom, and the iconic sound effects are just as they are in the video games. Jump on a spinning platform, and more dramatic Mario music plays. Even the simple act of walking along with the Mario figure has sound effects (and will reward players with coins for more “accurate” walking motions).

The Lego-ized ‘Mario’ characters and elements are frankly adorable

One thing that the app doesn’t do, though, is provide detailed instructions for building specific courses. According to Bennink, the team had originally tried an earlier version of the companion app that did just that, “but this totally overtook the joy of just building from your imagination, because you’re basically just completing a task that we gave you.” So they went back and restarted the app from scratch to give more general inspiration and share courses and ideas, rather than the more rigid demands it had started with.

Of course, the Mario sets are only meant to be a starting point. While the interactive elements are exclusive to the sets, Lego Mario will react to normally colored bricks, so players will be able to build out and modify the sets with their own brick collections, too. Gameplay isn’t exactly deep — while a few of the elements, like the rotating platforms or the sliding Piranha Plant challenge require careful balance or hand / eye coordination to maximize the amount of coins you’ll get, it’s not technically difficult in the way that a video game might be.

“We want Mario to be happy, because if Mario is happy, kids are happy.”

“We simply couldn’t translate all of the main mechanics straight to Lego play — Mario games are often about skill and making it to the finish,” says Bennink, something that players can simply cheat around if they choose. “So in that sense it’s more akin to Super Mario Maker, where you are intrinsically motivated to get to build levels.”

In a similar vein, there are no real punishments for failure, unlike the traditional game. “One of the decisions that we also made is that Mario doesn’t die or get hurt a lot,” Bennink explains. “And this is mainly because of Tezuka-san saying ‘We want Mario to be happy, because if Mario is happy, kids are happy,’ which turned out to be very true.”

Instead, the goal was to create a system of “right and more right.” More skillful play is rewarded with more coins, but you don’t lose out if you knock Mario off a platform or into a waiting Koopa. The challenge is more what players make out of it, although Lego will be featuring creative challenges in the app as inspiration when it launches later this summer. And while the app isn’t necessarily to play with the sets once they’re built, players will be able to save their creations and share them with friends.

If that sounds a lot like Super Mario Maker, it’s because that game was an influence on the Lego sets, says Bennink. “The main thing that we took from Super Mario Maker is the intrinsic motivation — what level do I want to build, what do I think is fun and then how can I share that then with my friends?”

Bennink also credits Nintendo’s influence in helping to keep the gameplay experience streamlined. “They have this amazing ability to keep things simple and to focus on the core experience. Rather than putting on all these layers of in-game upgrades and meta games around it, just make the core feel really good. For instance, we spent some time brainstorming at Lego of ‘What gestures can we do?’ And we came up with a list of 25 gestures and then Nintendo said ‘Why don’t we just make walking really fun?… So, you know, we spent six weeks just making the walking, and then they said ‘Why don’t we just make the jumping really fun?’ So we spend another couple of weeks on just jumping and nailing that.”

Ultimately, the best judge of the new Lego Mario sets will be the kids that they’re intended for, but the mix of Lego creativity with Nintendo’s simplicity and gameplay seems to be a winning combination.

The first Lego Super Mario sets will be available on August 1st.