Minecraft has maintained its place as one of the most popular games of all time since it’s initial release in 2009, putting it alongside other legendary games like Grand Theft Auto, World of Warcraft, and Call of Duty. Because it’s so awesome, we couldn’t help but round up the best Minecraft gifts for the upcoming holiday season.

For years, the sandbox video game has been the go-to game for livestreamers and education as well as an outlet for the most creative among us. Its easygoing open-world design is perfect for Crafters both young and old, and its exciting updates and cross-platform playability make it easy to keep enjoying for years, whether you prefer to play alone or online with friends.

If you have friends or family members that love Minecraft (or if you’re the one in your bunch who loves the game), you’ll want to grab a few of these fun themed gifts and stocking stuffers before they’re gone. And of course, download Minecraft if you haven’t already!

Yes, Minecraft is the type of game you could play forever. But if you ever want to shake things up a bit, try Minecraft Dungeons ($19.99) as it focuses on fighting baddies over building houses and mining for ore. The exciting action-adventure game is a dungeon crawler set in the world of Minecraft, so you’ll see familiar hostile mobs like skeletons, spiders, creepers, slimes, and zombies as well as new enemy mobs.

Minecraft Dungeons has you embarking on an epic quest to save the villagers and take down the nefarious Arch-Illager. You’ll fight your way through new terrain and even have opportunities to customize your character and upgrade armor and weapons. The game is available on PC, Nintendo Switch, PlayStation 4, Xbox One, and Xbox Game Pass, and also supports online co-op mode for up to four players making it perfect for family and friend playthroughs.

It can take a lot of time and energy to find diamonds in the game and craft them into weapons, but it’s not so difficult to get your own (faux) Diamond Pickaxe in real life. In fact, you won’t even have to break the bank to get one! It’s an officially licensed product from the game’s developer, Mojang, and is a full-size replica of the diamond pickaxe in the game.

With its bold colors and fun design, the pickaxe is perfect for displaying in your game room or using in your cosplay. And since it’s made of sturdy (yet cushioned) EVA foam, it’s also good for casual roughhousing. You probably won’t have any luck mining stone with it, though.

Mine for Ore Blocks 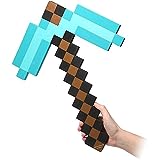 This EVA foam diamond pickaxe is an officially licensed replica from Minecraft (Mojang), and is perfect for collectors.

Many folks who grew up playing with LEGO bricks gravitated towards Minecraft, and the reverse is probably true of younger kids. So LEGO’s choice to start releasing themed sets from the game like this one, entitled The Crafting Box 3.0 only seemed natural. This set contains 564 bricks and pieces as well as mobs and characters like Steve and Alex.

The colorful and well-balanced Minecraft LEGO set is perfect for playing out all kinds of creative adventures as it includes a super awesome looking castle, a river, trees, a farm, a treasure chest, and even a functional TNT launcher. When constructed, the set measures 7 inches tall, 10 inches wide, and 10 inches deep, and will look perfect on a collector’s shelf (or in the hands of your children). 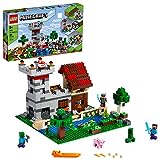 This is a fun-filled LEGO Minecraft set, with 564 bricks and fun player characters and mobs. Perfect for kids and collectors.

One of the best aspects of Minecraft is how easy it is to customize and mod—the options are seemingly limitless. You, too, can explore worlds and styles beyond what the vanilla version of the game offers by downloading skins, texture packs, and additional world maps from the Minecraft Marketplace. These do cost money, of course, but you can rectify that if you’ve got a few Minecoins in hand.

This digital gift card gets you a whopping 1,720 in-game Minecoins, which is enough to buy a variety of new skins, texture packs, and more. The digital code can be redeemed on Xbox, Android, iOS, Nintendo Switch, and Windows 10 platforms. Now you can mine in style!

For Buying In-Game Skins and More

Buy a digital gift card for 1720 in-game Minecoins, which are exactly what you need for buying texture packs, skins, and new world maps for expanded gameplay.

Though exploding Creepers are the bane of every Crafter’s existence, they are actually quite pleasant (and non-exploding) in plush toy form. Where the mob only dreams of destroying your house and other construction projects in the game, this version of the Creeper will quickly become your favorite cuddle partner or desk buddy.

This Creeper plush toy is officially licensed by Mojang, and it’s made of super soft polyester Valboa fibers (ideal for cuddling). It measures approximately 10.5 inches, so it’s not even as gigantic and scary as it is in Minecraft. 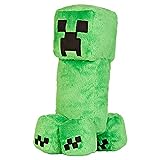 Buy a cute and soft plush toy of the iconic Creeper mob for your Minecraft or plushie collection.

Light Up Your Room: Minecraft Torch

Every good Minecraft adventurer understands the importance of torches. They make it easier to see your surroundings and help keep away any mobs with malicious intentions. So, go ahead and stock up on these Light-Up Torches for your own home, just to be safe.

The torch looks just like the ones in the game, and can be sat on a flat surface or mounted on a wall at a 45-degree angle (though it doesn’t come with any mounting hardware). It’s constructed with high-quality ABS plastic and requires three AAA batteries to work.

Light Up Your Room

These torches look stylish, just like they do in the game, and they help keep away the things that go bump at night…in the game.

Whether you prefer to play Minecraft on your smartphone or are just generally obsessed with the game (we totally understand!), a Creeper PopSocket Grip and Stand only seems logical. Hold your phone comfortably while showing off your undying love for everyone’s favorite mob at the same time. Plus, it’s a great idea for a gamer-themed stocking stuffer!

The fun PopSockets Grip makes it easier for you to hold your phone when performing tasks like texting, taking photos, scrolling through social media, watching videos, or taking a video call with friends. PopSockets’ advanced adhesive provides a secure hold on your device, but can also be removed or repositioned easily without ruining it. 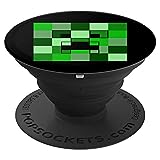 This fun PopSockets Grip and Stand is perfect for holding your phone comfortably while you game, scroll, and take calls.

Potions are a long-time favorite of Minecraft players who favor a more … alchemical approach to the game. Plus they’re cool to look at. And for once, these Color-Changing Potion Bottles are even cooler looking in real life than they are in the game. The bottle even lights up, and you can switch between eight different colors: indigo, light blue, cyan, green, peach, yellow, red, and white just by tapping on the bottle’s cork.

The potion bottle is officially licensed by Mojang, and is an original (and exclusive) ThinkGeek creation. It has a three-minute timeout in order to preserve battery, but all you have to do is touch the top to light it up again. The bottle measures 7 inches tall, 4.75 inches wide, and 2 inches deep, and it requires two AAA batteries to work.

Get one of these awesome officially licensed color-changing potion bottles to light up your gaming room.