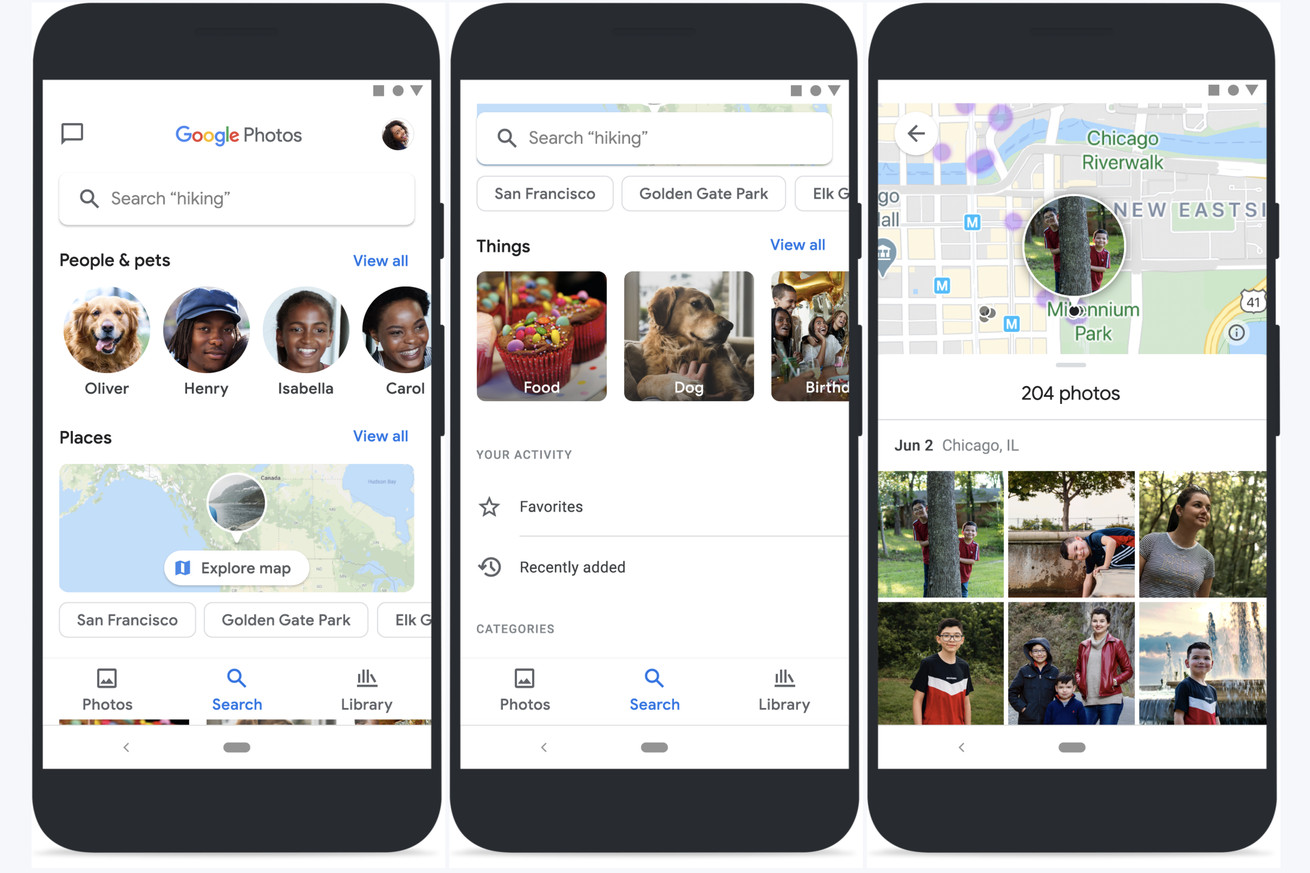 After five years as the dominant solution for photo storage across platforms, Google Photos is getting a big new redesign. The refreshed look, which includes fresh ways to navigate the app and a simplified pinwheel icon, is designed to better highlight your favorite old pictures, Google said. It also answers the top feature request Google says it’s received: a map view that lets you explore the photos and videos that you’ve taken by location.

“A lot of people really love the product, and the reason they love it is a little bit different than what we initially designed it for,” said David Lieb, product lead for Google Photos. “The thing they really love it for is this idea of nostalgia, and reminiscing, and looking back on your photos. So in this redesign, we decided to really lean into that. We think in the long run, that is the unique, durable value of Google Photos.”

The new Google Photos opens to a tab simply called Photos that contains both old favorites and recent shots. At the top of the tab, you’ll see Memories, a private archive of your old photos that you browse like Instagram Stories. (Introduced last year, the feature now has more than 120 million monthly users, the company said.) In addition to photos from years ago, you’ll also see a new section of Memories called “Recent Highlights.” That’s Google’s effort to showcase the best of your recent shots, along with automated creations like collages and animations that the app creates on your behalf. (Those creations previously appeared a tab called For You, which has disappeared.)

Below Memories, you’ll see your recent photos in reverse chronological order, with some subtle changes to their design and placement. Google Photos now makes automated guesses about which pictures you’re likely to find the most interesting, enlarging them in the feed as you scroll. Expect to see pictures of photos, babies, and landmarks rendered more prominently, with receipts, parking places, and whiteboard images shown a little smaller. Google also reduced the space between photos in the grid.

The search tab shows off Google’s machine learning capabilities, which have grown powerful in ways that people who use Photos only occasionally may not have fully realized. The top of the tab shows you the people and pets who appear most often in your photos and videos, which, for me, continues to be one of the best ways to browse the app.

Below that, you’ll find the new Places view, which allows you to browse photos and videos you’ve taken on a map. Tap “view all” on places, and you’ll see a grid of locations where you’ve taken a lot of images, and when you tap into one, you’ll see a clever two-paned view. On top is the map, which Google renders with hotspots showing where you’ve taken the most photos and images. Below is a grid of the photos on the map. Tap a hotspot on the map, and the grid beneath will shift to show only the photos in the hotspot. It’s a fast, fun way to browse a location and remember things you did in a given area.

“When you’re looking at your photos on a map, you want to see both your photos and the map at the same time,” Lieb said. “And surprisingly, nobody is doing it this way.”

Search also offers a clever “Things” view that tries to capture photos related to your interests. After spending the past few months making pandemic cookies, I was delighted to see that Google had created a new “baking” tab for me to look back on my recent creations. Search also lets you search your archive for dedicated categories, including screenshots, selfies, videos, and Google’s automated creations.

The final tab is called Library, and it’s a grab bag: a print store for turning your photos into prints and books, a link to utilities like a photo scanner and a tool for making animations, access to your deleted photos, and a list of your albums.

It wouldn’t be a Google app if it didn’t have a somewhat awkward messaging feature. Tap the speech bubble at the top of the app, and you’ll see a list of photos that you’ve shared, along with any conversations you’ve had around them with your friends. I’ve found Photos messaging more useful in theory than in practice. It’s hampered by the fact that Google doesn’t associate images with real identities, and so it has a hard time understanding who my friends and family are. (It’s also usually just easier to send a quick photo or two via SMS or another social app.)

I’ve found myself taking fewer photos than normal after months of sheltering in place, but Lieb said usage of Photos continues to grow during the pandemic. “Even when you’re stuck at home, you do want to record what was going on in your life,” Lieb said. “So we see people doing it even more today.”

The Google Photos redesign is now rolling out on Android and iOS.