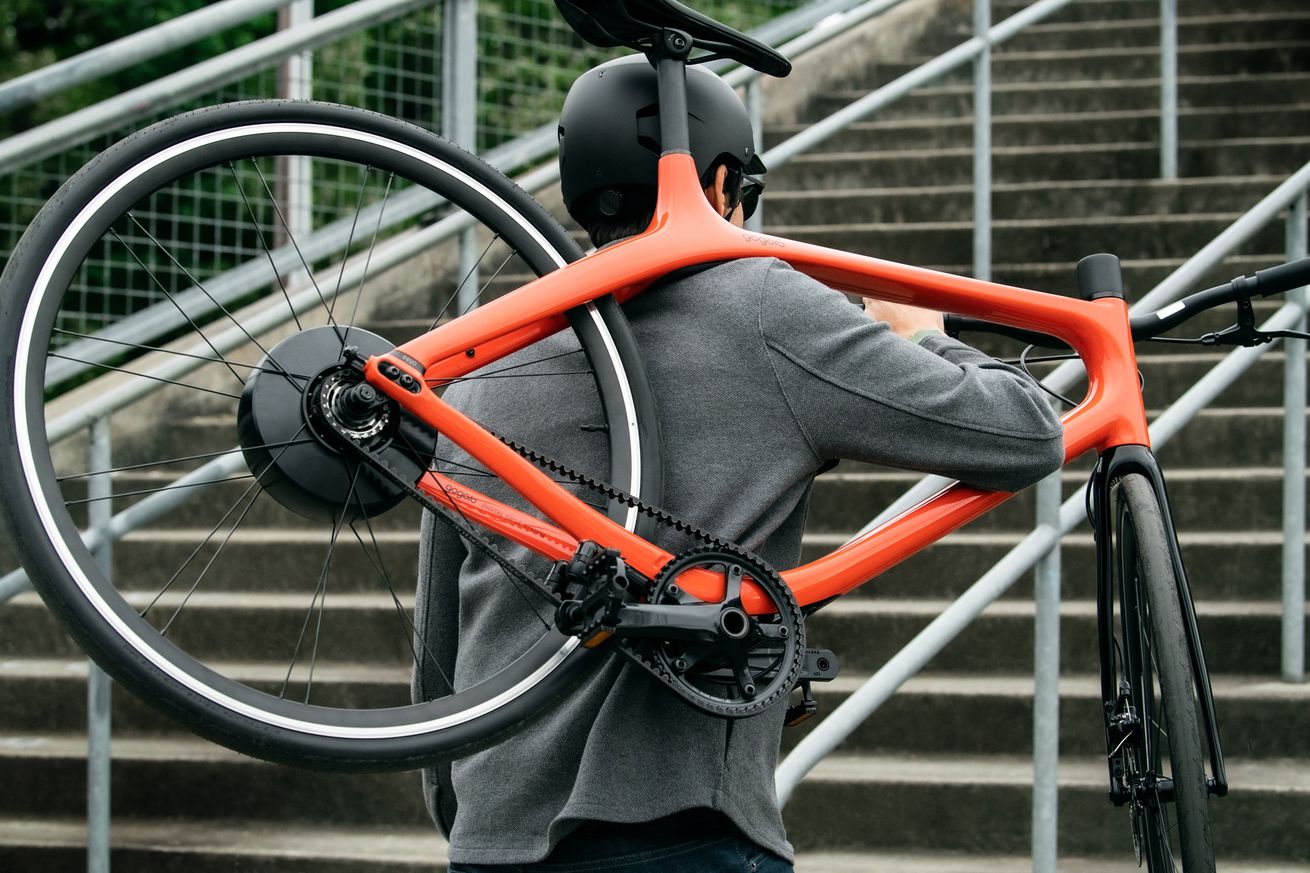 Five years after Taiwanese startup Gogoro debuted with a slick electric scooter at the 2015 Consumer Electronics Show, the company has now unveiled the Eeyo 1 and Eeyo 1S, its first forays into the booming e-bike market.

They’re both stylish open-frame e-bikes aimed at a premium slice of that market — no surprise, given Gogoro’s history with its electric scooters over the last few years and CEO Horace Luke’s past as chief innovation officer at HTC. “We’re not making a traditional e-bike with a big battery, or a big basket in the front, or big racks you can bolt on,” Luke tells The Verge. “The idea was to build a bike for the population that said, ‘hey, I don’t want a [Chevy] Suburban. I don’t want a [Ford] F-150. I actually prefer the sports car.’”

As such, Gogoro will charge sports car prices when the Eeyo 1 enters its three launch markets (the US, Europe, and Taiwan) this summer. The 27.5-pound base model Eeyo 1 costs $3,899, while the top-tier 26.4-pound Eeyo 1s costs $4,599 — prices that make VanMoof’s premium $2,000-and-up e-bikes look downright affordable.

They look great, but they don’t come cheap

Both versions of the Eeyo 1 e-bike are made with carbon fiber frames, which accounts for a hefty chunk of their price tags but is what’s driving a lot of weight savings. The Eeyo 1 uses an aluminum seat post, wheels, and handlebars, while the 1S features carbon fiber in all of those places. The Eeyo 1 offers customers a choice between a soft “cloud blue” or bright “lobster orange” frame. The Eeyo 1S comes in “warm white.”

Crucially, both bikes are powered by what Gogoro is calling the Eeyo Smartwheel. Instead of attaching the battery to the frame or putting it in one of the tubes, Gogoro has placed it in a hub in the back wheel along with an electric motor and some sensors.

The company is not the first to package all of the e-bike tech in this way, Luke admits. But he says “most of [those other] hub solutions have been cheap solutions that go on cheap steel.” Gogoro is also preparing to make this wheel / battery / motor combo available to other manufacturers, and perhaps even as a standalone product, which could pave the way for new lines of revenue.

This is similar to the approach Gogoro takes with its other products. For instance, the company makes it possible for other manufacturers to leverage the network of swappable batteries that power its e-scooters, incentivizing giants like Yamaha to push into the electric scooter space earlier than they would have otherwise.

With a full charge, the 43.6-volt, 123Wh battery in the Smartwheel will last for about 40 miles in “Sport” mode and 55 miles in “Eco” mode. The e-bikes are pedal-assist only, so there’s no independent throttle, and they have a top speed of 19 miles per hour. A torque sensor in the Smartwheel will constantly measure how much effort the rider is putting in and send power from the battery to the motor to help out according to whichever mode they’re in. The Eeyo bikes are belt-driven (another carbon piece), which means there should be very little delay in the delivery of that power, and — hopefully — less maintenance over the long run. (Luke says the whole bike has been designed to cut down on maintenance, though that’s something that has to be proven out over time.)

There’s no regenerative braking ability, which means a lot charging. Riders have to charge the Eeyo 1 using a cord with a U-shaped connector that snaps to the hub of the Smartwheel. Gogoro will sell an optional charging stand to Eeyo 1 customers that removes the need for the cable, and the stand will also be included with a purchase of the Eeyo 1S. It won’t be as easy to charge as an e-bike with a removable battery. But Luke says the open frame and the reasonable weight should make it easier to throw an Eeyo bike over the shoulder to carry up a flight or two of stairs if need be.

Both versions of the Eeyo 1 will work with a companion app that lets customers see some basic information about the e-bikes, and will make software updates possible. Gogoro is touting a Tesla-style “proximity-based auto-lock,” meaning that the motor will unlock as they approach the bike and seize up when they walk away. There is no other way to activate the bike, though, and the app is the only way to change ride modes.

These tradeoffs come from the fact that Luke says Gogoro focused on “agility and fun over utility,” which means customers shouldn’t expect the Eeyo 1 and Eeyo 1S to necessarily outperform other e-bikes. If someone has kids or groceries to haul, Luke is willing to admit something like a Rad Power e-bike may be a better fit. The Eeyo 1 e-bikes are instead supposed to be daring, design-forward products, the kind of thing people either splurge to buy or aspire to own. And much like a high-end sports car, it sounds like they will be a little finicky to use.

But Luke promises excellent ride quality, especially thanks to the build quality and the lighter frame. He also says he hopes the Eeyo 1’s design and ride quality will inspire other e-bike manufacturers to add a little more of that sports car mentality to their utility vehicles, to give people a “more fun way to get around.” And before long, he’ll probably try to sell them the Smartwheel while he’s at it, too.