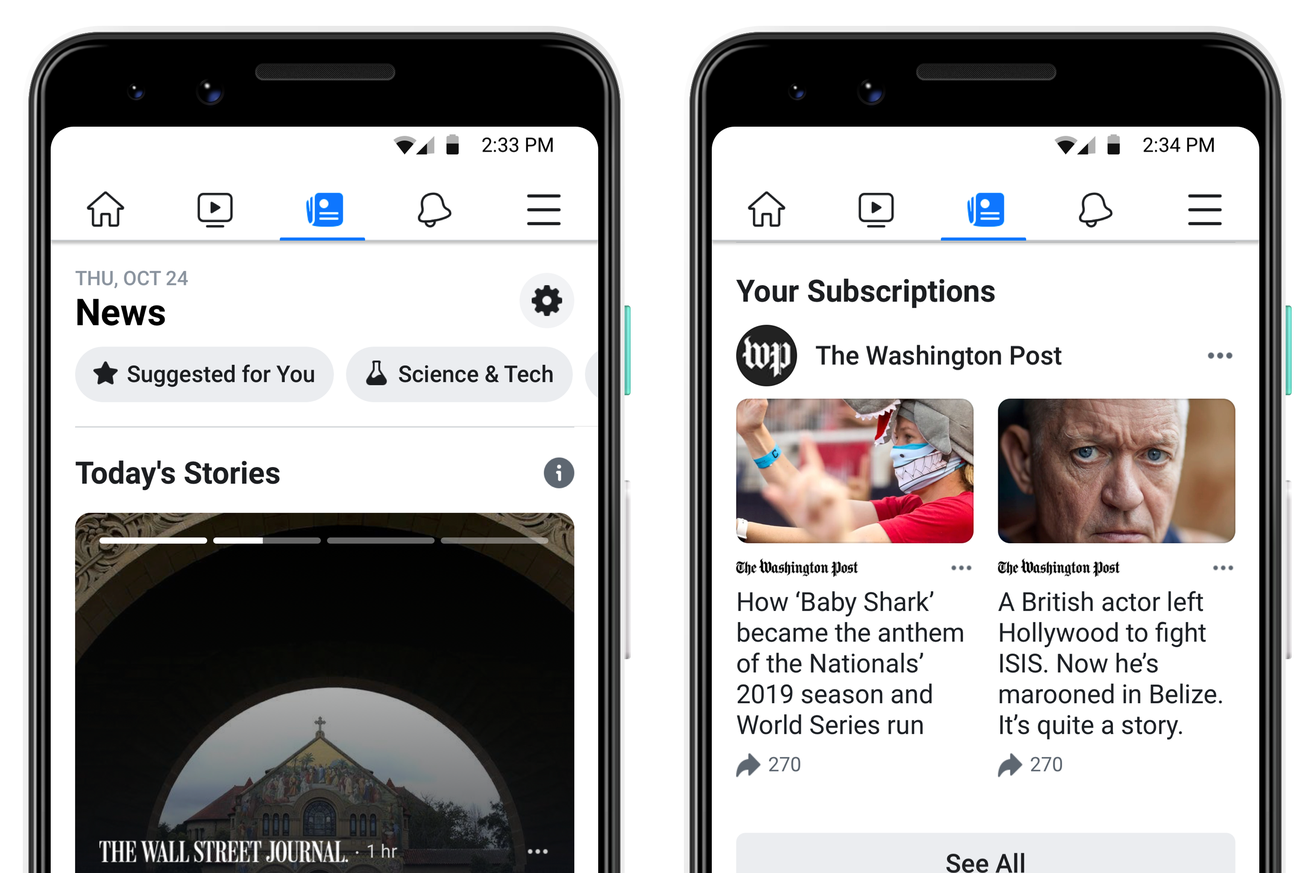 Facebook is launching its revamped news tab in the US today, reports TechCrunch, and the launch will include a dedicated local news section among other topics, including a George Floyd-specific section as of Tuesday. The tab can only be found on mobile right now only by tapping the hamburger menu, selecting “see more,” and sifting through a handful of other sections. It was first tested starting last October, and Facebook said at the time it would be paying participating publishers.

In an online FAQ detailing the structure of the new Facebook News, the company outlines its editorial strategy, including which publishers it decides to promote and what metrics it uses to pick one story from one outlet over another. To do so, the company is employing a human team and vetting sources through a new effort called the News Page Index. “The team is transparent about the following guidelines and will make curatorial choices independently, not at the direction of Facebook, publishers or advertisers,” the FAQ explains. “They will apply the same guidelines and criteria to our coverage about Facebook as we would to any other company or industry.”

Facebook says to qualify as one of its partnered publishers, those publishers need to have a big enough audience and also pass the company’s integrity standards, although the FAQ does not make clear where the line between objectionable and passable content is. Facebook does say it will rely on its existing third-party fact-checkers, the same ones who now help it check COVID-19 content and other sensitive subject areas, and the same moderation tools it uses to monitor clickbait, sensationalist content, and copyright-infringing material.

Facebook is trying again at news, but its history with journalism is very complicated

But it remains to be seen to what extent Facebook will try to make this editorially curated and paid partnership program a larger focus within the company and how much it will be willing to cut news organizations in on the financial rewards. Any page is capable right now of publishing news articles and having those articles promoted by the News Feed, either organically or through paying Facebook to boost the reach of the post. It’s unlikely, at least right now, that trusted sources of news promoted only within its hard-to-find new section will perform better than the current leaders on the platform, a majority of which are conservative pages that belong to Fox News and other right-wing organizations.

Facebook’s relationship with the news business is deeply complicated and strained by a number of high-profile controversies over the years as well as the platform’s ongoing issues moderating misinformation, election inference, and violent threats and other forms of hate speech. CEO Mark Zuckerberg sees his platform as a bastion for online free speech; his refusal to remove President Donald Trump’s violent threats against protesters last month is recent evidence of the company’s now well-established hardline stance.

Yet, Facebook’s ad business and its algorithmic News Feed have both contributed to financial struggles in the traditional journalism industry, the slow death of local news, and the overall news literacy of Americans and citizens of other countries around the world who have increasingly turned to unregulated and poorly moderated social networks for information. To that end, Facebook is at least trying to make local news a pillar of its new section; the company says it’s partnered with thousands of local news outlets for the section and that it’s a bigger focus than trying to serve general, national news, TechCrunch reports.

But again, the section is just the latest in a number of failed efforts over the years to try to partner with the journalism industry. Those include its Google AMP competitor Instant Articles and its big push for original video that resulted in mass layoffs at digital media companies after the company inflated metrics and eventually shifted away from prioritizing posts from big media pages.

Then there was the Trending Topics fiasco of 2016, in which Facebook was accused of harboring an anti-conservative bias in the articles it promoted on its website. The ensuing controversy and the eventual removal of the Trending Topics feature pushed Zuckerberg to distance his company from any form of editorial decision-making. That, in turn, paved the way for right-wing and alt-right media organizations and individuals to begin dominating the platform with incendiary articles and posts, conspiracy theories, and other questionable content that games Facebook’s algorithms and routinely goes viral. The same techniques are employed by overseas content farms, foreign interference campaigns, and other groups Facebook now registers as “coordinated inauthentic behavior.”