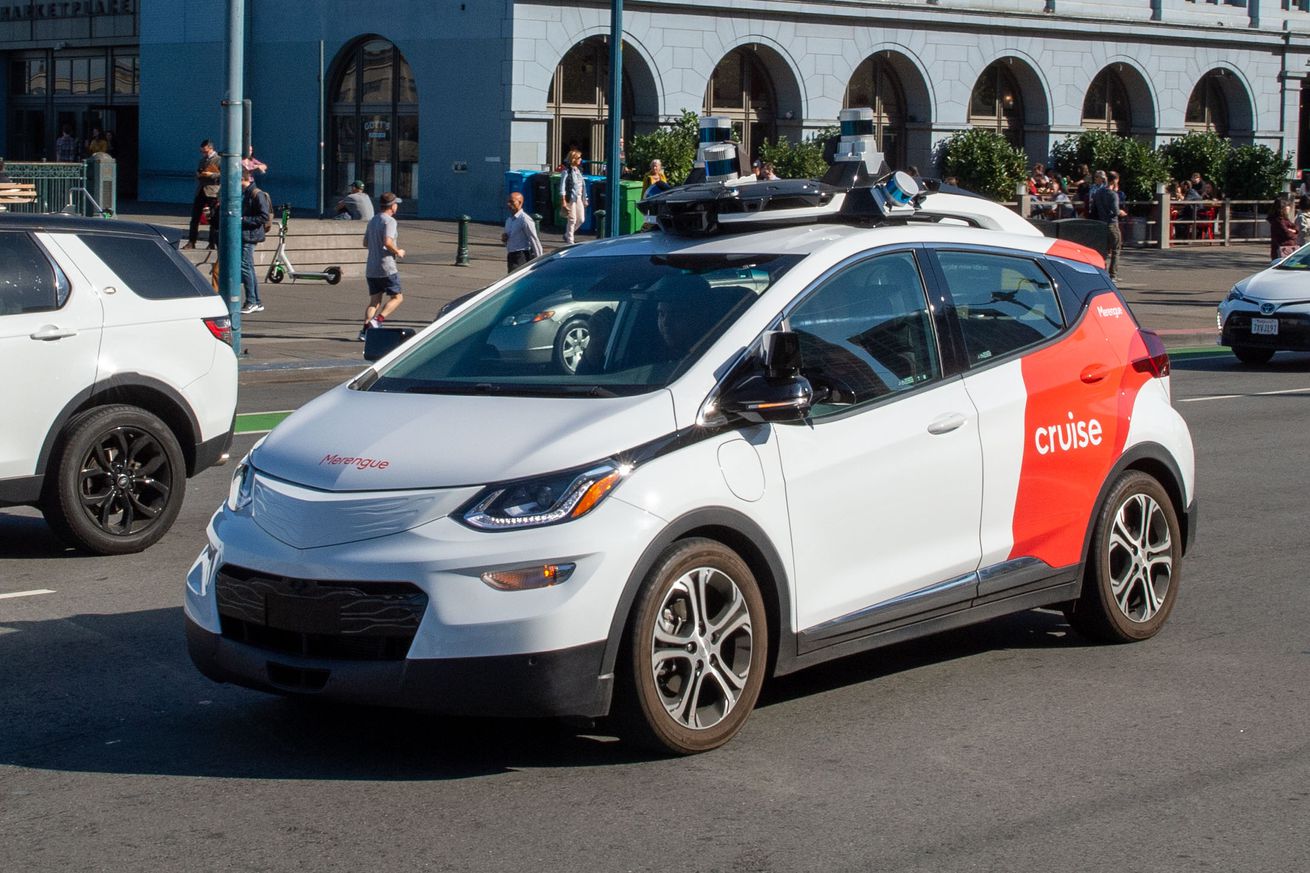 Cruise’s self-driving cars are back on the road in San Francisco, but the company may be skirting the city’s shelter-in-place rules in its rush to get there, some of the company’s backup drivers say.

In late April, Cruise announced that it would be redeploying some of its autonomous vehicles to help make deliveries for a pair of food banks in San Francisco. The pandemic had forced the company, a subsidiary of General Motors, to halt its operations in mid-March. Engineers, developers, and backup drivers were told to stay at home, as the city’s shelter-in-place order made public road testing impossible.

But the company found a philanthropic loophole that would allow it to spring some of its vehicles out of pandemic-imposed dormancy. “We had paused on-road testing to be safe due to the worsening COVID situation at the time,” Cruise said in an email announcing the program, “and had a fleet of all-electric, self-driving cars just sitting around — we thought this was a great way to put them to good use.”

But meal deliveries weren’t the only mission. Of the company’s four vehicle depots in San Francisco, at most two were deploying AVs for food deliveries throughout May; the other two were sending out vehicles for regular AV testing, according to two current Cruise employees and three former ones, all of whom requested anonymity because they were not authorized to speak.

Deliveries weren’t the only mission

One Cruise employee told The Verge they volunteered to go back to work delivering meals as an autonomous vehicle test operator (AVTO) for three days in May. During those three days, the employee said they conducted only one delivery. “[The] majority of my time there was just autonomous miles,” the AVTO said.

Another Cruise employee said in mid-May that only one facility, located 1201 Bryant Street, was deploying vehicles for the food bank deliveries. “All other locations are doing MA,” or mileage accumulation, a reference to Cruise’s normal process of driving around the city in autonomous mode collecting data, the employee said. Another employee recalled conducting four deliveries in one day. “After that just ‘safety mileage,’” the employee said.

The employees said they weren’t upset to be working, but they felt that the company was exploiting a loophole to resume its testing operations before it was allowed.

“I believe that it does violate the city’s stay at home order because it’s more than deliveries being done,” a Cruise employee said. “It’s the only way for Cruise to operate during essential business hours. If you ask me, it’s pretty obvious.”

“I believe that it does violate the city’s stay at home order.”

San Francisco was one of the first US cities to impose shelter-in-place rules designed to slow the spread of COVID-19. As such, the city has seen much lower rates of infections and deaths than other dense major cities.

On May 22nd, all Bay Area counties loosened the rules to allow for the reopening of some businesses, manufacturing, retail, and childcare facilities. But autonomous vehicle testing was not included on the list.

“Violation of or failure to comply with this Order is a misdemeanor punishable by fine, imprisonment, or both. (California Health and Safety Code 120295, et seq),” the city’s order reads.

Cruise said the majority of its vehicles in San Francisco were conducting deliveries, but it acknowledged that some were on the road in a supportive role, such as mapping or standing by to replace a delivery vehicle if the need arose. The company said it had received permission from the California Department of Public Health for the additional vehicles. A spokesperson for the department did not immediately respond to a request for comment.

“AV testing with no food delivery is not allowed.”

“Our entire fleet has been dedicated to crisis response with the majority of vehicles performing delivery and others serving as support — all as an extension of our delivery program,” Cruise spokesperson Milin Mehta said in a statement. “From when we decided to initially suspend our fleet to when we began delivering food, we have worked with public officials at the city and state level and received approval for our efforts.”

But an ex-Cruise employee disputed the notion that the additional vehicles would be needed on the road to “support” the company’s delivery program. “If they were ‘in support’ those vehicles would be stationed at the home facilities on the chargers, ready to go and be swapped when needed,” the ex-employee said. “Not on the road wasting charge. How are you going to swap those AVs that are in support of delivery vehicles when both AVs have been on the road and charge is low?” (Cruise’s fleet consists of all-electric Chevy Bolt vehicles, each with a range of around 260 miles.)

Since April, Cruise says it has helped deliver 30,000 meals, including 6,500 on behalf of the SF-Marin Food Bank to nearly 1,800 separate households.

Cruise put out a call for volunteers among vehicle operators in early April to help with the deliveries, less than a month after San Francisco Mayor London Breed issued a stay-at-home order effectively suspending nonessential transportation. There was no mention that some vehicles would also be conducting regular AV testing in a support role for the delivery vehicles, employees said. Cruise requires two backup drivers to ride in each of its vehicles during normal testing, and the same rules would apply for deliveries.

But some of the company’s rules had been changed to account for the virus. AVTOs would be assigned to work with only one partner and one vehicle for the duration of the delivery project, Cruise said. Before COVID-19, AVTOs would sit next to each other in the driver and passenger seats. But in accordance with social distancing guidelines, one AVTO now sits in the back passenger seat. (It’s not clear whether the back passenger seat is the Centers for Disease Control and Prevention’s recommended six feet from the driver’s seat in a Chevy Bolt, Cruise’s preferred vehicle.)

One current AVTO called the new setup ridiculous. “The measure was claimed to be aligned with new COVID standards, but it is completely unsafe [without] new additives to supplement the back seat rider to safely help the driver in the front (ie, blind spots),” the AVTO said. Another AVTO said the new setup was “slightly different, but things change at work all the time.”

“The measure was claimed to be aligned with new COVID standards, but it is completely unsafe.”

Cruise isn’t the only AV company to seize on deliveries as a way to get its autonomous vehicles back on the road. Nuro was using its driverless delivery vehicles to help transport medical supplies to two Bay Area field hospitals. And Waymo recently redeployed its self-driving minivans to help conduct deliveries for two local nonprofits.

There have been other examples of companies jumping the gun to restart operations amid the lockdown. Tesla reopened its factory in Fremont, California, in violation of the county’s stay-at-home order, with the company’s CEO Elon Musk calling the rules “fascist.” Several of the company’s workers recently tested positive for COVID-19.

Cruise’s decision to conduct regular testing alongside its delivery program speaks to the enormous pressure AV companies are under to deliver results for their parent companies and investors. In recent years, the tech and auto industries realized their collective vision of thousands of autonomous vehicles on the road was further away than originally believed. The companies working on self-driving cars require billions of dollars in investment for vehicle purchases and expensive sensor technology, all without a commercial business to bring in any offsetting revenue.

Cruise has been ramping up its presence in San Francisco after failing to meet its own deadline of launching a full-scale robot taxi service there by the end of 2019. The company now has 233 autonomous vehicles permitted to test on public roads, according to the California DMV. The company drove 831,040 miles in 2019, almost doubling the number of miles it drove the previous year.

In addition to curtailing public AV testing, the coronavirus pandemic has also forced several companies to lay off employees. Cruise, which has financial backing from SoftBank Vision Fund, T. Rowe Price and Associates, and Honda, said last month that it was laying off 8 percent of its 1,800-person staff, including around a dozen AVTOs who work for a Cruise contractor called Aerotek.

This week, Cruise seemed to realize that some of its AV testing could be seen as out of bounds, employees said. All four of the company’s vehicle depots are now conducting food deliveries, employees said. “All shifts, all facilities, all doing food,” an employee said. Asked if the company’s self-driving vehicles were still driving “safety miles” after completing their deliveries, the employee said yes. “That’s still the norm.”