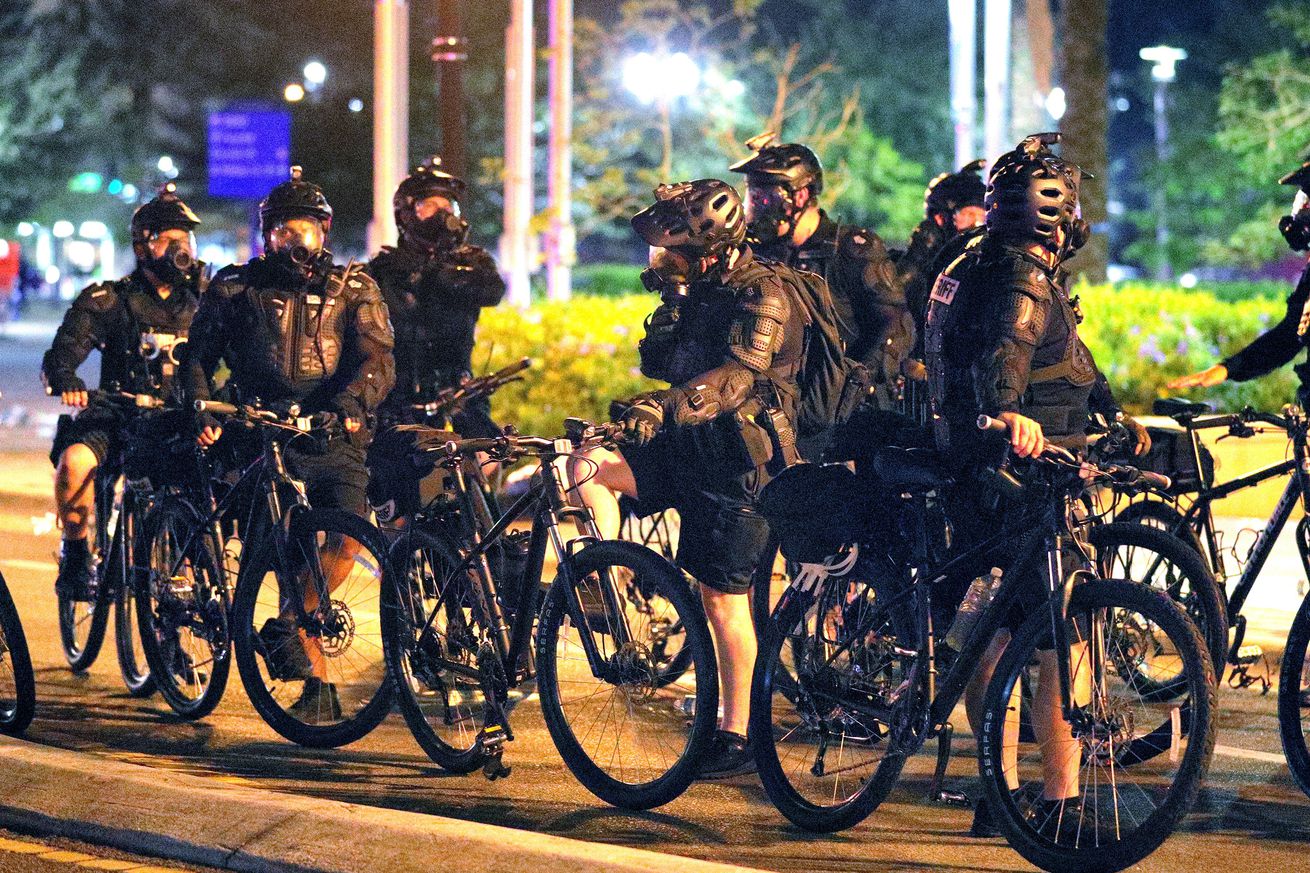 It’s not often the humble bicycle finds itself at the center of national upheaval.

Images of police officers using bicycles to harass people peacefully demonstrating the killing of unarmed black people this past week, in addition to cops violently seizing and confiscating protesters’ bikes, have prompted an unusually forceful response from the cycling community. One bike company even went so far as to sever ties with police departments.

BikeCo, the official distributor of Fuji Bikes in North America, announced it was suspending the sale of its bikes to police departments after viewing videos of NYPD officers using Fuji-branded mountain bikes to threaten and corral protesters. “We have seen instances in the last week where police have used bicycles in violent tactics, which we did not intend or design our bicycles for,” the company said in a statement.

“We have seen instances in the last week where police have used bicycles in violent tactics.”

“To hear that there are instances where bicycles have been used as a weapon against those who are vulnerable, those speaking out against the unjust treatment of people of color, and those standing alongside them advocating change, has deeply upset our community, our company and the heart of the Fuji brand,” the company continued.

A representative from the company told Bicycle Retailer and Industry News it has begun discussions with police departments and with the International Police Mountain Biking Association, which provides bike training for police officers.

Other bike companies released statements supportive of the protests but stopped short of rejecting sales to police departments. But one company seemed to invite even more controversy based on its response.

Trek CEO John Burke posted a stem-winding statement on his company’s website last week outlining a series of proposals he believes will help ameliorate the problem of police brutality and racism but made no mention of images of police wielding Trek bikes to intimidate protesters.

Then on Saturday, Burke defended the role Trek’s bikes play in “community-based law enforcement programs.” He also decried “any unlawful action by any citizen including police.” A spokesperson for Trek notes that the company doesn’t have any contracts with police departments and that the bikes are sold through local bike shops based on the needs of police departments.

Donate all proceeds from the sales of these bikes to an appropriate charity & pledge never to sell bikes to cops. pic.twitter.com/gDTSOmkObi

To be sure, Fuji’s police bikes are also sold through bike shops. BikeCo said that its dealers who have been in contact support the decision to start a dialogue with police departments. BikeCo is headquartered in Northeast Philadelphia.

“It’s a delicate situation,” a BikeCo representative told Bicycle Retailer. “We have dealers whose shops were looted. We also have employees who are former police officers or who have family members who are police officers. We are just saying, ‘let’s stop and talk.’”

After several days of mounting criticism on social media, Trek released another statement that sought to further distance the company from police action.

“Recently we have seen photos and video of Trek bikes that have been used by police in ways that are abhorrent and vastly different from their intended use,” the company said. “For over 25 years, we have seen police on bikes, out of cruisers and offices, building relationships in the neighborhoods they serve. The past two weeks has turned the view of police on bikes from a community asset to a liability. A positive outcome of the recent protests is that we are starting to see real police reform being discussed at local and national levels. We believe bikes can play a positive role by continuing to get officers out of cars and armored trucks and into the community where trust can be built.”

“Recently we have seen photos and video of Trek bikes that have been used by police in ways that are abhorrent.”

But Trek’s statements still weren’t enough for some cycling advocates. “[J]oin me in reminding @JBTrek08 that cops are using his bikes as weapons against protesters and he should stop selling bikes to cops,” Transportation Alternatives senior editor Jessie Singer tweeted.

A petition on Change.org calling on bicycle companies to divest from police departments has earned nearly 6,000 signatures as of June 11th. “Although Trek Bikes have been the most visible in police bike brutality, we know that the bike industry on a whole is complicit in this racist system of policing,” the petition reads.

A spokesperson for Specialized said it does not have contracts with police departments but that some police may have purchased Specialized’s bikes on their own.

The fact that huge brands like Fuji and Trek felt compelled to respond speaks to the rapidly shifting landscape around police abuse and systemic racism. It also reflects big changes in the bike world. Bike companies — both traditional and electric — have seen huge spikes in demand in a world gripped by COVID-19. Cities are transforming their streetscapes to better accommodate the rising number of residents choosing to get around on two wheels.

“We have to get rid of this notion that bikes are inherently good or bad,” said Shabazz Stuart, CEO of Oonee, a bike parking startup based in Brooklyn. “They are environmentally friendly, they are efficient, and they are a more sustainable way to travel around cities, but that does not mean that the person traveling on that vehicle is laudable, good, or praiseworthy.”

Stuart noted that, unlike bike manufacturers, car companies have not publicly condemned the use of their products by police to ram protesters. Indeed, it’s accepted practice in the auto industry to develop and market certain vehicles as police cruisers. Some bike makers have tried this as well, namely Seattle-based Volcanic Bikes, which bills its products as “The Toughest Patrol Bikes on Earth!” (A spokesperson for Volcanic did not respond to a request for comment.)

But the fact that cops are using their bikes in a violent way shouldn’t detract from the importance of biking as a mode of transportation, or from the seriousness of police brutality, Stuart said. “I’m a black guy from Brooklyn,” he said. “So the way I look at it is the cop will be beating you down if they’re on a bike or a scooter, if they’re walking or in a car. They’re still the same old cops.”

“I look at it is the cop will be beating you down if they’re on a bike or a scooter, if they’re walking or in a car.”

Bike cops have become familiar fixtures of police forces over the past couple of decades. (The internet had itself a hearty laugh at this particular squad of bike cops from Miami as they were filmed skidding to an awkward stop and looking very much like a pack of stunting ‘80s movie villains.)

A much more common scenario is cops targeting cyclists for ticketing, arrests, or violence. On June 5th, Daily News reporter Catherina Gioino tweeted that cops were told to “focus on the bicyclists,” which led to the arrest of four protesters and the confiscation of their bikes. Newsday’s Matthew Chayes said in a tweet that bike-riding after the curfew would result in an “automatic collar.” Citi Bike, the city’s popular bike-share system, was ordered to shut down at 6PM, a full two hours before the start of the citywide curfew.

Police, especially the NYPD, have a long history of hostility toward bike riders. For years, police have used questionable, sometimes violent, tactics to sweep up participants in Critical Mass, a group that rides around the city in support of cycling rights.

In New York City, a group of heavily armored, bike-wielding police officers wearing outfits they’ve dubbed “turtle uniforms” emerged during the protest. It can be discouraging, especially for people who rely on their bikes to get around and view the two-wheeled velocipede as an increasingly important counterweight to car dominance in cities, to see cops dressed as Imperial Stormtroopers brandishing their bikes like battering rams.

Bikes can still play an important role in city government, Orcutt said, noting most people would rather see police officers patrolling parks and pedestrian plazas on bikes rather than CO2 spewing SUVs. But that shouldn’t detract from the reality that bikes, first and foremost, are vehicles for protests. “People who are interested in social change tend to embrace the idea of bikes as city transportation,” Orcutt said, “and vice versa.”

Stuart agrees. In recent weeks, cyclists have helped redirect traffic so people can march in the streets and organize mass rides in solidarity with Black Lives Matter, he said.

“You go to these protests,” he added, “and you literally see piles of bikes everywhere.”