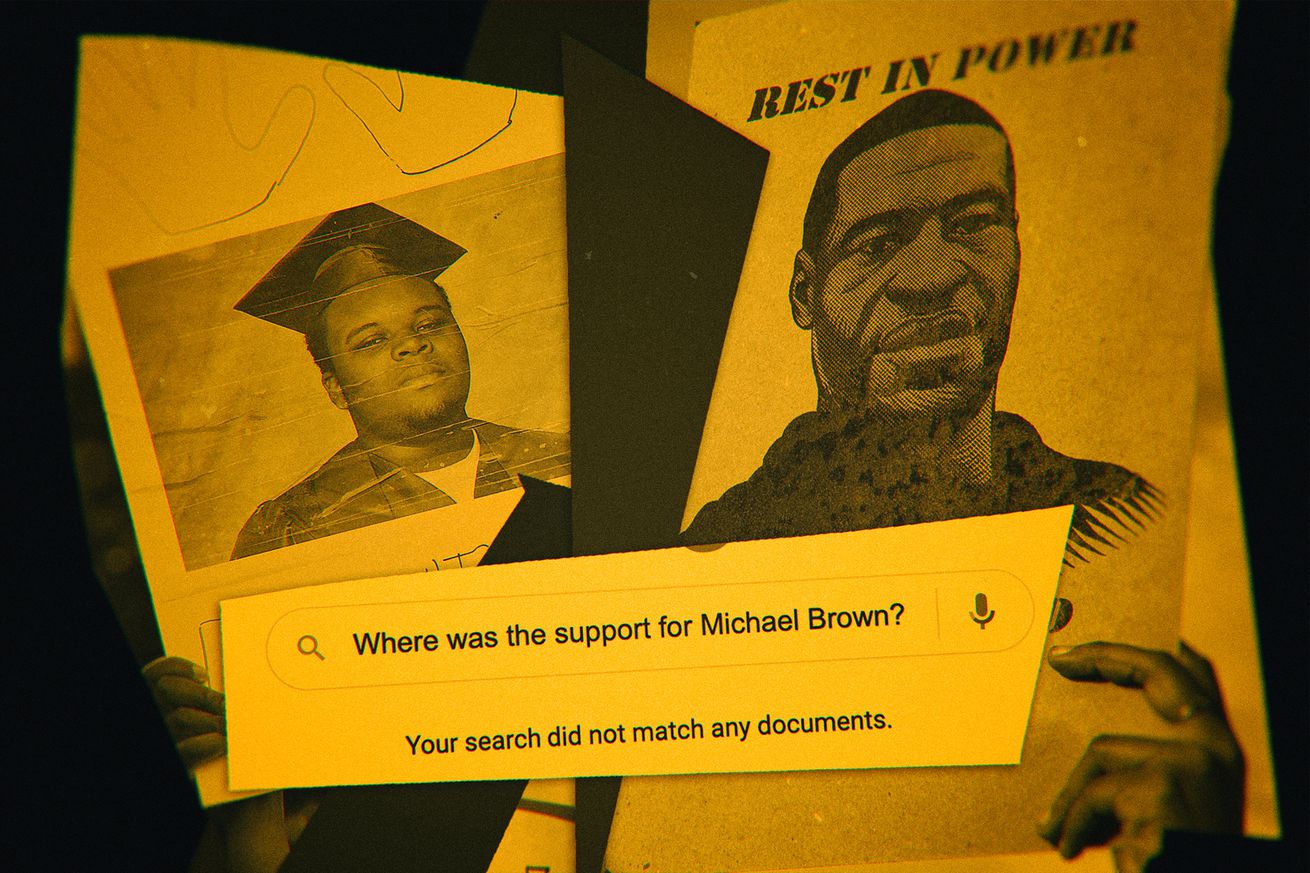 This week, Amazon, Apple, Facebook and their peers put out statements of solidarity against racial injustice. Let’s revisit their stunning silence six years ago.

In the days since the death of George Floyd, technology’s biggest companies and their leaders have made public statements expressing solidarity with Black communities. The communications — which, really, are press releases — condemn racism and call for unity. Some at least name George Floyd, Breonna Taylor, and Ahmaud Arbery. Few say “Black Lives Matter” outright.

More meaningfully, many companies have committed donations to causes fighting racial injustice in the millions of dollars.

So some of the wealthiest businesses in the world are showing up in a moment when the national attention has turned to racial injustice. But surely, they must have shown up before? It hasn’t even been six years since the deaths of Eric Garner and Michael Brown spurred the protests in Ferguson, Missouri. Many of those companies’ CEOs found time to publicly participate in the Ice Bucket Challenge to raise money for ALS, so surely they spared a moment to show solidarity with Black Lives Matter in 2014, right?

Let’s compare the corporate response today with what was said six years ago. We researched responses to the events of 2014 through online searches, checking company newsrooms, and sweeping social media accounts:

“We believe Black lives matter,” reads a blog post published on June 3rd. Amazon committed to donating “a total of $10 million to organizations that are working to bring about social justice and improve the lives of Black and African Americans.” Amazon’s Black Employee Network will also be given a grant to “fund local organizations that support education and racial equality initiatives in communities across the country where our employees live and work.”

Here is Amazon’s tweet committing to solidarity with the Black community.

We could not find public responses from Amazon regarding the deaths of Eric Garner and Michael Brown or the Ferguson protests.

Apple CEO Tim Cook published an open letter, “Speaking up on racism,” on Apple’s website on June 4th. In the letter, Cook made a number of commitments:

We commit to continuing our work to bring critical resources and technology to underserved school systems. We commit to continuing to fight the forces of environmental injustice — like climate change — which disproportionately harm Black communities and other communities of color. We commit to looking inward and pushing progress forward on inclusion and diversity, so that every great idea can be heard. And we’re donating to organizations including the Equal Justice Initiative, which challenge racial injustice and mass incarceration.

Cook shared a similar version of this letter to Apple employees on May 31st, where he committed Apple to matching all employee donations made for the month of June.

Today, as Minneapolis gathers and the nation memorializes George Floyd, we mourn a life ended in its prime and everything it represents. We feel a duty to channel grief into action, and we hold to the hope that a single soul may yet change the world.

CEO Tim Cook shared a tweet from Pope Francis on the day of Michael Brown’s death.

@Pontifex: Violence is not conquered by violence. Lord, send us the gift of peace. #prayforpeace Amen!

We could not find other public responses from Apple regarding the deaths of Eric Garner and Michael Brown or the Ferguson protests. In fact, here’s what the Apple newsroom looks like during those dates:

Facebook CEO Mark Zuckerberg committed to giving “additional $10 million to groups working on racial justice” in a Facebook post on May 31st. He also noted that his philanthropic arm, the Chan Zuckerberg Initiative, has invested $40 million annually for “several years” to organizations fighting racial injustice.

In a December town hall Q&A, Zuckerberg was asked about social media’s role in helping strengthen communities in the wake of Ferguson and other protests against the use of excessive police force. He shared his response publicly in a video. “I believe we do two things: give everyone a voice and provide greater diversity of perspectives,” Zuckerberg said in his post accompanying the video.

As the debate continues about Ferguson and the tragic death of Eric Garner, I’m often asked what role social media plays in strengthening communities.

I believe we do two things: give everyone a voice and provide greater diversity of perspectives.

This was a top question at our recent Townhall Q&A, and you can see my answer in the video below.

Giving everyone a voice is relatively new in the world. Only in the past 10 years has the internet enabled billions of people to widely share their views and experiences. I believe that giving everyone this power is fundamental to creating more worldwide understanding.

A greater diversity of perspectives is also important for creating understanding. Before the internet, we might have only gotten our news from a few TV stations or newspapers. Now we get updates from many more people and sources.

If you’re interested in understanding how diversity of ideas works in social networks, check out this paper that explains mathematically why you see more diverse information through social media: facebook.com/notes/facebook-data-team/rethinking-information-diversity-in-networks/10150503499618859

We could not find other public responses from Facebook regarding the deaths of Eric Garner and Michael Brown or the Ferguson protests.

Google CEO Sundar Pichai published an email sent to Google employees on June 3rd, titled “Standing with the Black community,” where he made the following “initial” commitments:

We’ll be giving $12 million in funding to organizations working to address racial inequities. Our first grants of $1 million each will go to our long-term partners at the Center for Policing Equity and the Equal Justice Initiative. And we’ll be providing technical support through our Google.org Fellows program. This builds on the $32 million we have donated to racial justice over the past five years. We’ll also offer $25 million in Ad Grants to help organizations fighting racial injustice provide critical information.

As a result of last week’s internal giving campaign, I‘m pleased to share that you all have contributed an additional $2.5 million in donations that we’re matching. This represents the largest Googler giving campaign in our company’s history, with both the largest amount raised by employees and the broadest participation.

“We’ll work closely with our Black community to develop initiatives and product ideas that support long-term solutions—and we’ll keep you updated,” Pichai added. “As part of this effort, we welcome your ideas on how to use our products and technology to improve access and opportunity.”

Today on US Google & YouTube homepages we share our support for racial equality in solidarity with the Black community and in memory of George Floyd, Breonna Taylor, Ahmaud Arbery & others who don’t have a voice. For those feeling grief, anger, sadness & fear, you are not alone. pic.twitter.com/JbPCG3wfQW

We could not find public responses from Google regarding the deaths of Eric Garner and Michael Brown or the Ferguson protests.

Microsoft CEO Satya Nadella’s May 28th remarks to employees about the protests in Minneapolis were published on LinkedIn. As part of those remarks, Nadella discussed Microsoft’s Criminal Justice Reform Initiative, which was formally launched in 2019.

“This initiative invests in partnerships and programs working to drive reforms, focusing on policing,” Merisa Heu-Weller, director of the initiative, said in a March 3rd blog post. “While we recognize that disparities exist throughout the system, we believe that by focusing on policing, and building positive relationships between police and communities, we can help keep people out of the system and reduce the disparities within it.”

Heu-Weller also said that “teams across Microsoft have partnered with organizations across the United States working on criminal justice improvements” since 2014.

Nadella tweeted his support for the Black and African American community on June 1st. He has also retweeted many statements from Black Microsoft employees shared on Microsoft’s official Twitter account.

There is no place for hate and racism in our society. Empathy and shared understanding are a start, but we must do more. I stand with the Black and African American community and we are committed to building on this work in our company and in our communities. https://t.co/WaEuhRqBho

We could not find public responses from Microsoft regarding the deaths of Eric Garner and Michael Brown or the Ferguson protests.

Dorsey also tweeted #startsmall grants to benefit Black and Brown communities, support ex-offenders, and more. Dorsey first began making #startsmall grants in April after moving $1 billion of his Square equity to an LLC to be used to fund COVID-19 relief. All of the grants made so far are tracked here.

Dorsey’s Twitter thread with his most recent grants begins here:

$3mm to Colin @Kaepernick7’s @yourrightscamp to advance the liberation and well-being of Black and Brown communities through education, self-empowerment, mass-mobilization to elevate the next generation of change leaders. https://t.co/WGgKziHnwB

Racism does not adhere to social distancing.

Amid the already growing fear and uncertainty around the pandemic, this week has again brought attention to something perhaps more pervasive: the long-standing racism and injustices faced by Black and Brown people on a daily basis. pic.twitter.com/8zKPlDnacY

Dorsey went to Ferguson, Missouri shortly after Michael Brown’s death to participate in protests, and tweeted extensively while there. At the time, he was Twitter’s executive chairman, not its CEO.

Feels good to be home. I’ll be standing with everyone in Ferguson all weekend #HandsUpDontShoot

We could not find other public responses from Twitter regarding the deaths of Eric Garner and Michael Brown or the Ferguson protests.

These companies may not have shown up in 2014, but given the very low bar, the fact that they have in 2020 is an encouraging sign of progress. Still, a statement of solidarity and a few donations should be just the beginning. There is the acknowledgment of racism, and then there is the ongoing work of being anti-racist.

Amazon, Apple, Facebook, Google, Microsoft, and Twitter—these companies are proud of being some of the most powerful institutions in the world, and often tout that they are making the world a better place. If they commit to their pledges of “pushing progress forward” and taking on “the fight against systemic racism and injustice,” that effort could really help the Black community — or at the very least, amount to more than just promises and platitudes in a press release.