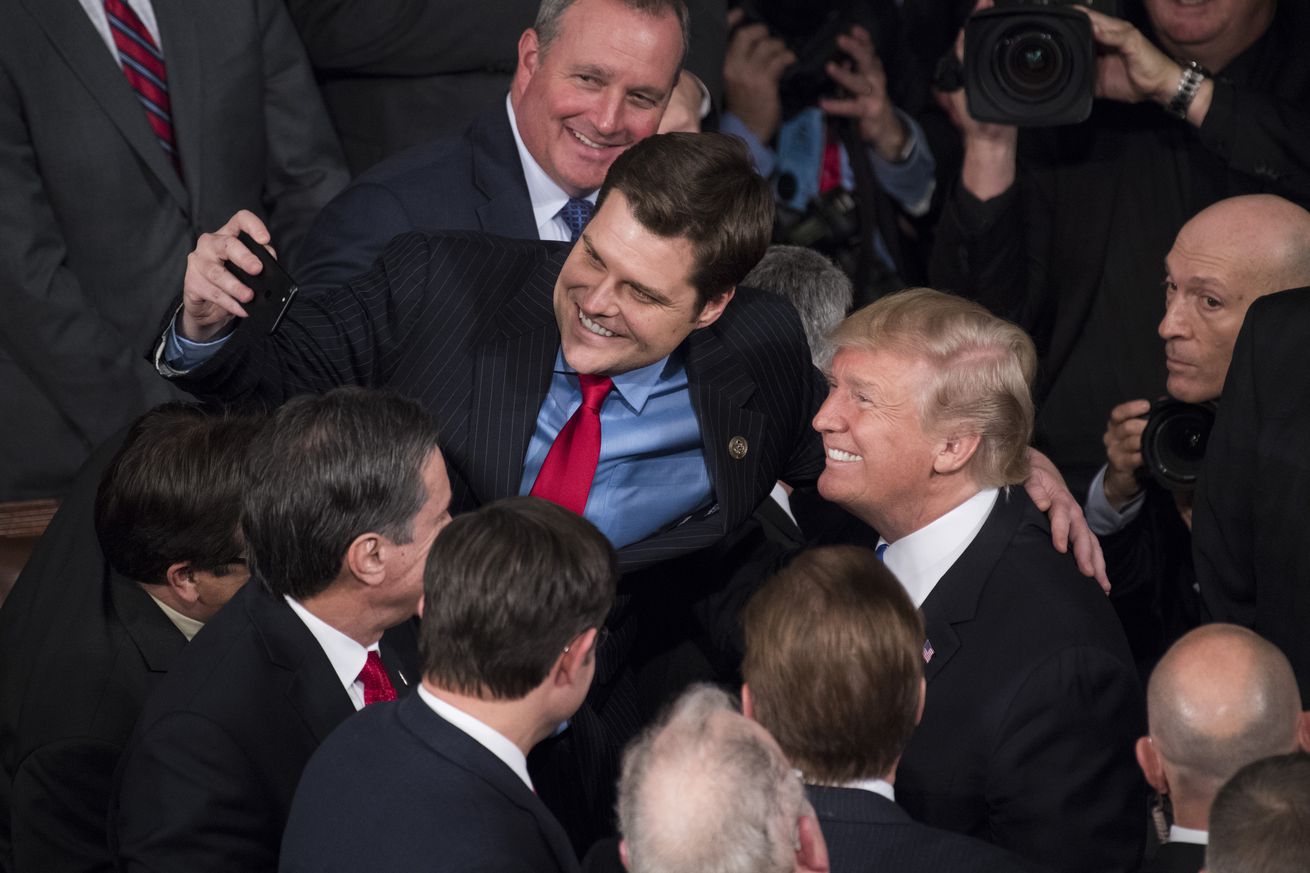 Emerging after days of darkness, President Donald Trump threatened Americans on Monday night with a military crackdown involving “thousands of heavily armed soldiers.” Shortly before Trump appeared on camera, federal police under his authority attacked a peaceful group of people near the White House with tear gas and rubber bullets, including members of a local Christian clergy. The group was violently cleared from the churchyard without warning so that Trump could walk over to create propaganda. Years in the making, Trump’s violent rhetoric, spread by the most powerful communications companies in history, is being realized in violent action against ordinary people by the hands of armed authorities.

President Trump celebrates violence. He is responsible for the grotesque abuse of children and families on our borders. He pardoned a Navy SEAL convicted of war crimes. He celebrates violence at his rallies, and he has complained that his supporters are not violent enough. He celebrates violence against journalists. Years before George Floyd was killed by police, Trump told police that they should harm prisoners in their custody. Because he desires violence wherever he looks, the president even wishes football was more violent. His followers listen.

Earlier in the day on Monday, two close Trump allies in Congress made shocking remarks on Twitter following the president’s threat to vaguely designate huge swaths of Americans as “terrorists.” Rep. Matt Gaetz (R-FL) suggested that authorities hunt down and kill Americans “like we do in the Middle East.” (Twitter took action against the tweet for glorifying violence but did not remove it.) Sen. Tom Cotton (R-AR) asked Trump to use the Insurrection Act to deploy military forces across the US and said the military should give “no quarter for insurrectionists, anarchists, rioters, and looters,” which means to kill people without taking prisoners. In both cases, in the auspices of Trump’s fury, prominent members of Congress called for the extrajudicial killing of Americans. They’re not even trying to be subtle anymore. People who have lived through genocide elsewhere in the world are sounding the alarm.

“No Quarter” was the rallying cry of Confederate soldiers when they met black Union soldiers on the field of battle. It portended mass executions. https://t.co/wfNbSwBqdQ

We are now far beyond the petty fight over “conservative bias.” Who cares? Right-wing complainants have already declared social media platforms irreparably biased, despite overwhelming evidence to the contrary. Fox News and other right-wing media organizations thrive on Facebook and Twitter and routinely see their messages flourish there. The charge of bias has always been a hoax perpetrated by demagogues who find profit in partisanship. Besides, the president and his allies have already accused the platforms of censoring them. They will not preserve any good faith by continuing to broadcast his hateful messages.

The charge of bias has always been a hoax

It is understandable why Facebook and Twitter have largely cast aside the responsibility of dealing with the president’s dangerous rhetoric. It’s true that, even despite his evident harm, banning Trump has always sounded like a cheap resistance fantasy or a lame election-year meme. And it has been hard to identify a single week under Trump’s rule that has been worse than all the others. His behavior has been consistently outrageous in a way that threatens to numb our instincts and tempts paralysis. Crossing the president and his allies is also guaranteed to reap abuse; after finally taking action against Trump, the president organized harassment against an individual Twitter employee, resulting in death threats.

On top of all of that, going up against a sitting president and millions of his supporters seems very bad for business. Trump has been a boon to Twitter’s user base, even though the president is a nexus of abuse on the platform. And fighting a political party that has proven it will react to any perceived sleight with extreme hostility could have existential consequences. Stirring the resentment of millions of users with a severe action would put Facebook and Twitter in uncharted waters. If not existential, the fight would likely prove very expensive to endure; both Democrats and Republicans have already spent the last few years ratcheting up harsh talk against Facebook for its own long list of abuses, and Republicans may be spurred into real action. It could also embolden other governments around the world to disrupt their operations.

But even if companies like Facebook and Twitter do nothing to curb the president, it’s hard to imagine how they will thrive under an authoritarian regime that is already threatening to revoke the fundamental legal protections that enable their existence. Trump launched a “plainly illegal” attempt to regulate the internet immediately after Twitter added a label to fact-check one of his tweets. It’s hard to believe that was only four days ago. We are already living in a different world.

The risks for taking action are real, but there are more important things than business. It will only take a few people with dignity and bravery to make a difference inside of social media companies. Those people are already emerging inside of Twitter, all the way up to CEO Jack Dorsey, who finally decided Trump’s behavior is serious enough to warrant action. According to OneZero, a small team of influential decision-makers inside of the company quickly escalated Trump’s misleading election claims to the top. After the president and his deputies began harassing a lone Twitter employee unconnected to the final decision, Dorsey rebuked the White House. “Fact check: there is someone ultimately accountable for our actions as a company, and that’s me,” he wrote. “Please leave our employees out of this.”

Facebook CEO Mark Zuckerberg has expressed disgust with Trump’s recent remarks, but nonetheless has retreated to the position that his platform is an “institution” that must preserve free expression. Zuckerberg may not have discovered Dorsey’s courage yet, but his employees are taking unprecedented actions to voice their disapproval of Facebook’s role in delivering the president’s violent messaging. Dozens of Facebook employees walked out on Monday in protest of the company’s decision not to take action against Trump’s dangerous posts.

“Personally, I have a visceral negative reaction to this kind of divisive and inflammatory rhetoric,” Zuckerberg wrote of Trump’s violent posts on Friday. “But I’m responsible for reacting not just in my personal capacity but as the leader of an institution committed to free expression.”

The right to free expression is beautiful, powerful, and fundamental to human life. The First Amendment protects the right of people in the United States to speak freely without government interference. For millions of people around the world, including those of us at The Verge, the internet has extended and enhanced the right to expression, especially in places where protections like the First Amendment are scarce. Giving people a voice is noble, and Facebook and Twitter ought to be commended for their role in expanding speech. But they also must see that they are being played by powerful people who do not care about free expression and, in fact, want to destroy it. And though companies like Facebook and Twitter may sincerely value the exercise of free speech, part of that exercise includes consciously deciding when to not say something. Indeed, the First Amendment also protects that right, and social media companies are not obligated to spread Trump’s hateful words.

Mr. Zuckerberg should widen his lens. Free expression is not contained wholly within the borders of a text box on Facebook. Right now, in cities and towns across the country, state authorities are violently cracking down on Americans who are peacefully exercising their right to speech. The president has decided to respond to public cries for peace and relief by directing the might of the United States toward silencing them. He continues to use private platforms to spread his incendiary rhetoric, threatening more escalation, more violence, and more fear. The president abhors speech and celebrates violence.

By continuing to provide him with a platform, Facebook and Twitter have become a key mechanism in the president’s effort to silence his critics and violate their civil rights — not in their news feeds or timelines, but where they worship, where they gather, and even where they live.

In response to a question from a Facebook employee on Friday, Mark Zuckerberg criticized Twitter’s recent action against the president. “If you really believe that a post is going to cause people to go do real-world violence, then that’s not the type of thing that I think we should have up even behind a warning,” he said.

The real-world violence is here. There is blood in the street. What else will it take to start believing?