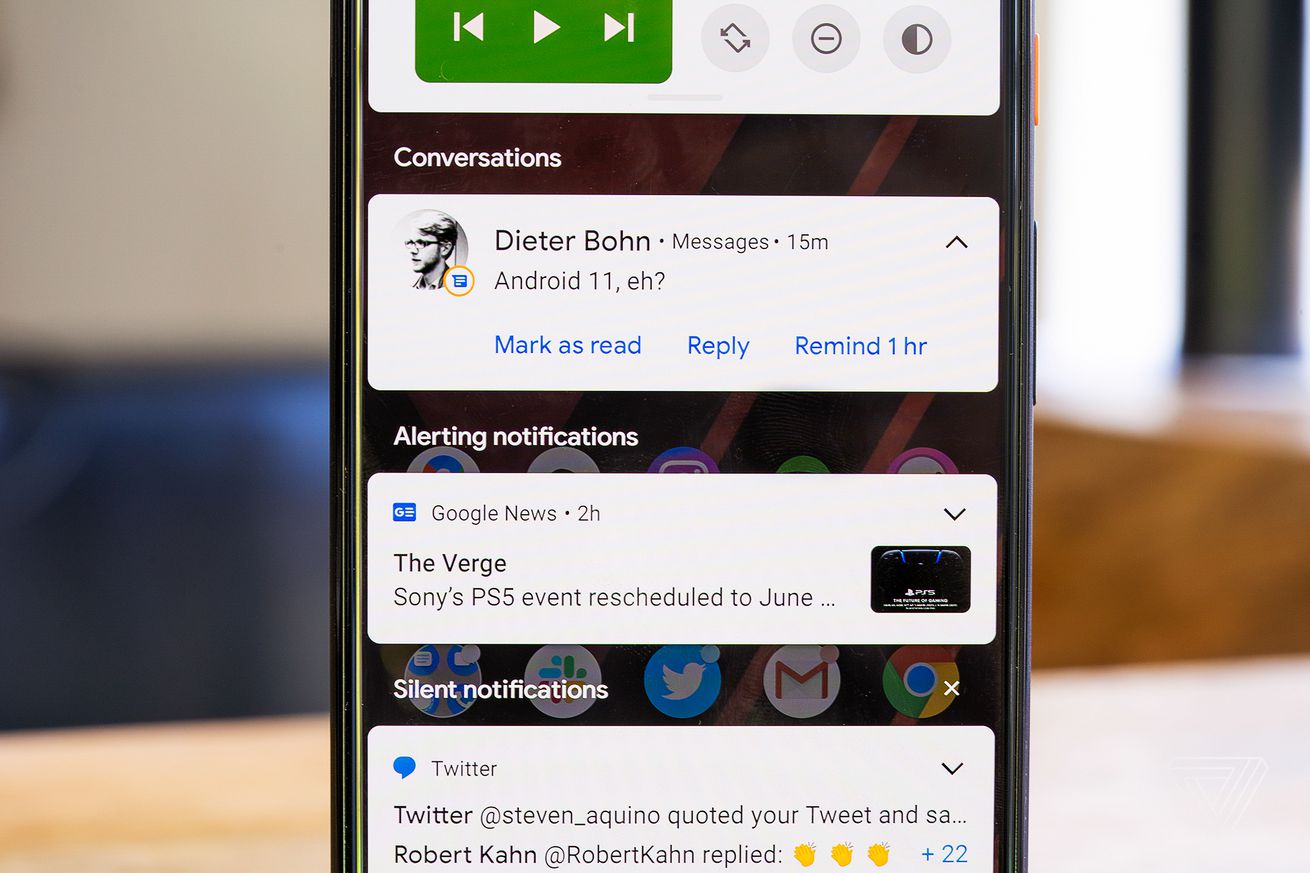 The official beta for the next version of Android is out now, and if you have a spare Pixel phone, I really do recommend you check it out. If you don’t, my recommendation is not to install it — betas are never a great idea on something you truly depend on, and your main phone is likely near the top of that list. I’ve been using a build close to what Google released today for a week and I haven’t had any catastrophic crashes, but there have been some bugs.

I wrote up a lot of observations and made a video detailing the new features yesterday, but something I struggled to get across then and I think I’m going to struggle to get across now is how much better the texting experience really is. I say that even though essentially no apps fully support Google’s new pop-out “bubble” feature yet.

It’s a struggle to describe because fundamentally what Google has done seems so small. It has taken boxes that used to appear in one place and make them appear in another place. While I wouldn’t go so far as to call the experience transformative, I do think that it’s hard to understand how good it is without using it for some time.

We’ll see how I feel after a few more months, but right now I find that Android 11 offers a a more enjoyable and more coherent overall messaging experience than iOS.

That is a sentence I never thought I would write. In fact, if you simply Google the phrase “messaging mess” on The Verge, you will find that it’s nearly synonymous with Google and the article with the phrase is often written by yours truly. Can Android 11 really fix all of that?

Well, no, of course not. But what it has done is make a fundamental problem on smartphones more manageable. Android 11 can’t fix Google’s messaging mess, but it has made the overall texting experience on smartphones better.

The difference between Google’s messaging mess and the overall mess on smartphones is simply that Google blew several opportunities to win at mobile messaging. Now, it’s going for something more “open” by trying to get all carriers worldwide (and maybe Apple) to upgrade from SMS to RCS in a consistent and universally compatible way — and also make it possible to layer strong encryption on top of it. It’s taking longer than hoped.

RCS aside, the problem is that there are too many texting apps and you can’t really convince all your friends and loved ones to just choose one. In some parts of the world, that statement doesn’t obtain because everybody uses WhatsApp, but at least here in the US, messaging is fragmented across iMessage, SMS/RCS, WhatsApp, Facebook Messenger, Signal, Telegram, and any number of other apps I could list here.

That’s a problem for both Android and iOS users, but it feels more acute on Android because the default option is a bad, broken experience: SMS. Or, if you’re lucky, it’s RCS — but even then your encryption options are substandard. There may be messaging fragmentation on the iPhone, but at least the default experience when you’re texting other iPhone users is pretty good.

It’s a first-world problem, but a modern smartphone is supposed to help you with these hassles. It’s also an old problem, and smartphones have tried to tackle it in the past with decidedly mixed results.

Many have tried to solve the multiple texting app issue. All have failed

I could wax ecstatic about the solution Palm tried with webOS: Synergy. Essentially webOS tried to just give you one messaging app and within it you had threads with all your contacts. Inside each thread you could switch between whatever texting method you preferred. It was beautiful and, like webOS itself, doomed.

Similarly, Windows Phone tried to abstract away apps entirely into its People Hub, which combined lots of different contact, communication, and social features into one place. Another doomed idea on another doomed smartphone platform.

Those efforts failed not just because those platforms failed, but because fundamentally no chat service is interested in having its users in another app. In the same way streaming services balk at being included in another company’s smart TV interface, there’s no reason for Facebook Messenger or Google Chat or Skype to let you use a more generic interface. The days of XMPP are (sadly) behind us.

Which is why Android 11’s solution is actually genius. It doesn’t try to replace those apps, it simply collates their alerts into a single place. You get benefits that are similar to the way apps like Trillian or Adium combined IM services back in the day, but it’s just in your notifications instead of in an app.

That’s also, in theory, the genius of the bubble system — I’ll have to use it more to see how it pans out. To the user, it’ll just feel like any other app icon (albeit floating over your other apps). You tap it to open your texts, with icons for each of your conversation threads. The fact that tapping on one of those icons happens to open a distinct app doesn’t really matter, because at least it’s all in one place.

Even without those bubbles, the Conversation system in Android 11 is great because of its distinct priority system. I am able to set my wife and boss as priorities in the apps I use to talk to them (and can optionally allow them to break through Do Not Disturb.).

But some of the group chats I’m in are very chatty (Hey Bohn clan: love you!), so I want to turn off all notifications for them. Until Android 11’s conversation section, silencing those alerts was a recipe for ignoring my family — not what I want, especially now. But now, those alerts are still promoted up above random news alerts — I see them, but I’m not interrupted by them.

Earlier I called the disparate chat apps a kind of fragmentation, but another word for that is competition. It’s not the worst thing in the world to have to deal with multiple chat apps, because at least that means there’s not one dominant, global chat service.

Solving these problems at the notification layer is probably the best possible solution right now. Switching back to an iPhone or even an earlier version of Android today after my piece was published, I immediately felt a sense of friction and annoyance.

Now all I have to do is get some more of my friends off iMessage.

┏ Android 11 beta: all the announcements. Here’s all the Android 11 news since it was first announced.

┏ How to install the Android 11 public beta.

I’ll also direct you straight to one of my tweets. When I originally looked over the improvement to Android’s Voice Access accessibility feature, I thought it was just iterative — and since Voice Access was already great before, it didn’t seem worth including in my original feature. But trying it more, I became more impressed. The feature does a better job understanding what’s on the screen and why, so you can control it with your voice using much more natural language than before. I should have included it from the jump — not just because it’s good, but because even iterative improvements to accessibility merit attention.

One thing I left out of my Android 11 beta hands on was the improved Voice Access, which now understand screen context and content. That was a mistake – it’s actually incredible.

You don’t have to use a grid or button numbers, you can just say what’s on the screen. Watch: pic.twitter.com/wXidxZGVjt

More from The Verge

┏ Intel’s 3D-stacked Lakefield chips are here to take on ARM in laptops, tablets, and foldables. Chaim Gartenberg explains what’s up with these new chips. With the impending ARM announcement for Macs, the stakes for Lakefield are suddenly much higher than before.

The hybrid core setup works by combining a more powerful Core-class Sunny Cove core (the same 10nm architecture the 10th Gen Ice Lake chips are based on) with four low-power Atom-class Tremont cores (for a total of five cores and five threads) on a single die. That arrangement allows for a balance of power, efficiency, and battery life that a purely Core or purely Atom setup could achieve. … If that sort of chipset arrangement sounds familiar, that’s because it’s strikingly similar to ARM’s Big.Little architecture,

┏ Verizon’s Samsung Galaxy S20 has mmWave 5G but less RAM. I have yet to be convinced that mmWave is a good idea for phones.