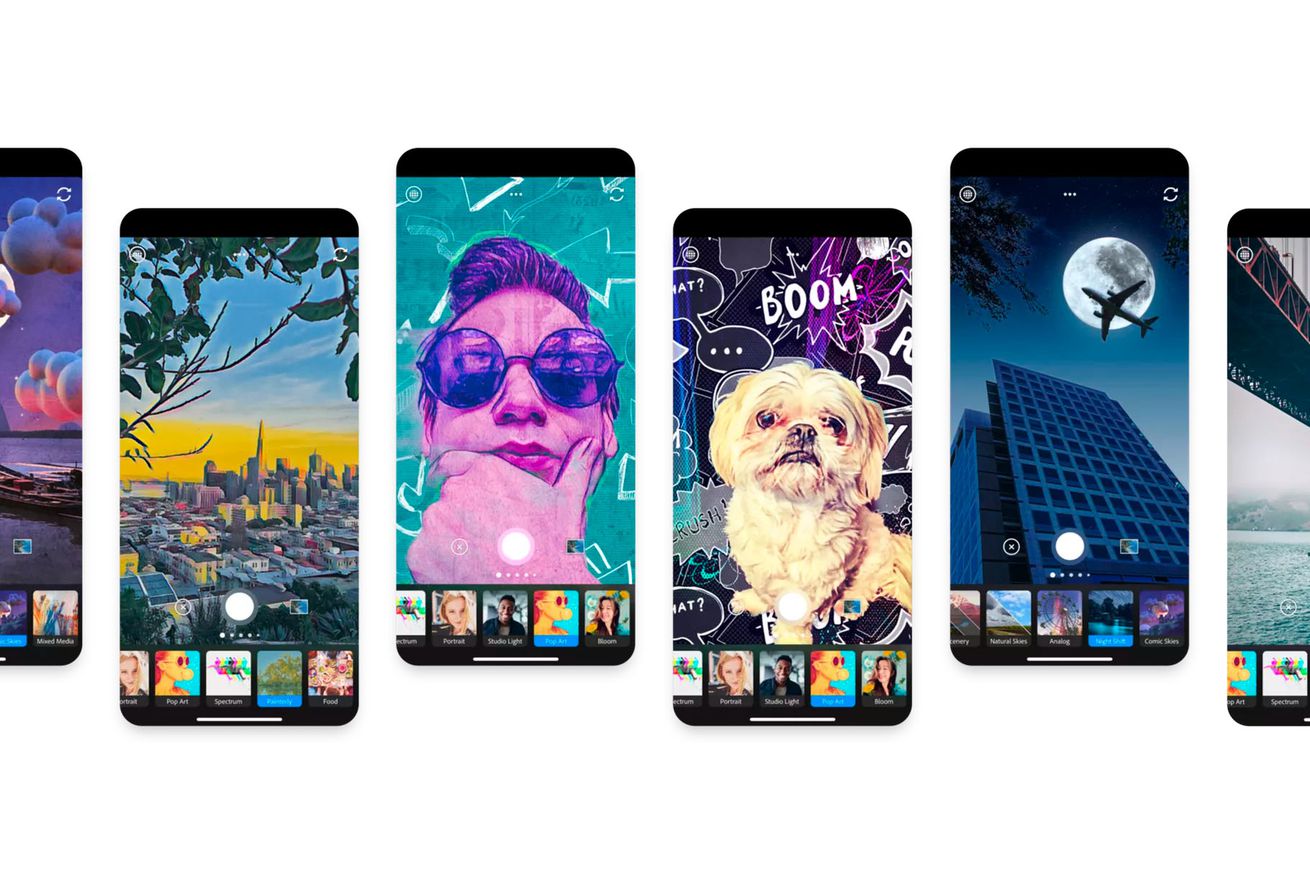 Adobe is launching a new app today called Photoshop Camera that’s filled with a bunch of very elaborate filters that can change your face and the world around you. Some of the filters are really impressive: several identify the sky behind you and replace it with perfect clouds or a magical moon; another puts you inside a Black Mirror-esque glitchy world; and another makes you look like you’re in a comic book.

The app is available for free and works on both iOS and Android (though only recent Pixel, Galaxy, and OnePlus models are officially supported for the latter). Adobe launched a preview of the app in November.

Photoshop Camera has little to do with Photoshop beyond the fact that both have to do with photos and both of them are apps. You can do some basic photo editing here — adjust contrast, exposure, saturation, and so on — but mostly you’re meant to snap a picture, filter it, and leave. If you want to make adjustments, there’s a magic wand button that automatically dials in changes for you so you don’t have to worry about the actual settings. (The app can’t record video, which is too bad because the effects would be pretty fun.)

There are some fun filters here, if you’re willing to open an app other than Instagram

Adobe’s goal was to “bring the magic of Photoshop directly to your camera’s viewfinder,” Adobe CTO Abhay Parasnis told The Verge.

The tricky thing for Adobe will be getting people to use its app instead of the numerous filters available inside the social apps people are already opening every day. Photoshop Camera has some cool looks, but Adobe is competing with basically every social media app under the sun here, and there are plenty of great filters inside Instagram and Snapchat.

The team at Adobe “don’t see ourselves in competition with social apps or OS camera apps,” Parasnis said. He hinted that, in the future, you can expect to see Adobe work on partnerships to get its filters inside of other apps, perhaps even built into some phones’ native cameras so that Adobe’s “magic lights up in those environments as well.”

Photoshop Camera really is a fun app to play around with. When you open it, you’ll find a half dozen or so filter options, most of which have a bunch of variations you can swipe between. One of my favorites, the Spectrum filter, has different versions that can split your image across multiple color spectrums, drop you into some geometric void, or cover you with glitched-out stripes. Some others — like the food filter — seem to just be bland color filters without much special going on. But the face filters tend to get pretty elaborate.

Adobe intends to add more filters over time, some of which will come in partnership with specific artists and creators. At launch, there are a handful of collaborations, including one with Billie Eilish that makes skies look eerie and rains her Blohsh logo down on you. Creators can’t sell these right now, but Parasnis said that “you can imagine a world … where there will be special purposed lenses directly monetized” around events or venues.

For Adobe, the goal is also to introduce people to its ecosystem through smaller, less intimidating apps, in the hopes of eventually converting some of them to its paid professional tools. The strategy is “working well,” Parasnis said, “and Photoshop Camera is the next one in that journey for us.”